Bava At The Royal!

As I posted about before, due to the much appreciated efforts of Toronto taste-makers David Bertrand and Chris Alexander, The Royal Cinema was able to acquire four of the Mario Bava titles that played NYC's terrific Mondo Bava retrospective last month. 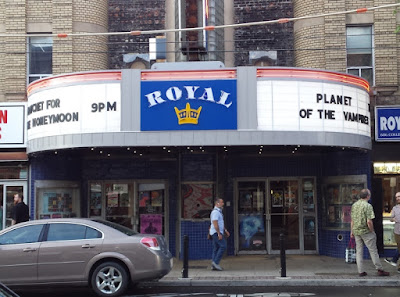 I was able to catch three of the four and I was really happy to see they were all very well attended. To me, the more people that are aware of this Italian maestro, the better. Most horror fans, including myself way back when, come into Italian horror by way of Dario Argento and Lucio Fulci – nothing wrong with that, they are giants to be sure – but it is also important to dig into the marrow.


The first screening was for Bava's 1965 sci-fi Planet of the Vampires, and the 4K restoration of this film was absolutely gorgeous. Not only does it highlight the wonderful colours and production design, but it does so without taking away from the majesty, as is sometimes the case when you throw light on material that was never intended to be overly scrutinized. While the influence on Ridley Scott's Alien is undeniable – more in story than visual design – I think Planet of the Vampires is the best outer space tale that exists in the span between Forbidden Planet and TV's Star Trek.

After Vampires, I saw the one film that was playing that weekend that I hadn't seen, 1970's Hatchet For The Honeymoon. While it was not near the top of my favoured Bava's titles, it has all the hallmarks of his oeuvre. I was gobsmacked to learn that the film's star Steven Forsythe actually resides in Toronto and showed up to the screening. How many people are still around that can talk about working with Mario Bava? Hearing him talk about it was a real treat.


I wasn't able to attend the Black Sunday screening, but I'm sure it went over well. I certainly enjoyed it when I watched it during my Time Out countdown. Sunday was screening I was really looking forward to, 1966's Kill Baby Kill...

I adore this film, not only for its influence on scores of filmmakers – the people who are currently ensconced in Twin Peaks should look to this film for a proto-template of The Lodge – but it is also just a incredibly well put together film. Sure, the overuse of the shock zoom may induce a few chuckles, but I think this is Bava at his best. He gives equal measure to story and aesthetics in this one. Contemporary filmmakers who seem in such a rush to get to the jump scare could learn a lot from how the set pieces are paced and constructed in this film. There has to be a build up or who gives a shit, right?


Mario Bava was a master and I was so glad to see some of his finest works on the big screen.
Posted by Jay Clarke at 10:00 AM