The last of the Mario Bava films on the Time Out Best 100 List that I had yet to see was his 1960 debut, Black Sunday. 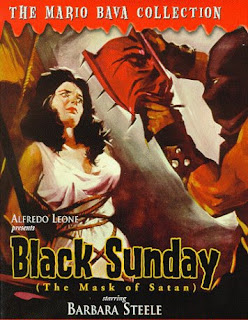 Black Sunday (aka The Mask of Satan, the original version I watched) tells the story of Princess Asa (Barbara Steele) & Javuto (Arturo Dominici), two evil souls put to death for heresy, attempting to claw their way back to the land of the living on the two-hundredth anniversary of their execution.

Bava had been working in the film business as a cinematographer for many years and had already stepped in as director on a few projects prior to Black Sunday, but this one is considered his official start as a director. As evidenced by the journeyman quality of this picture, he was clearly ready and up to the task. 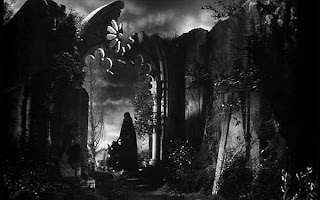 You may think that a man who became so renowned for his use of colour, would’ve been somewhat limited by black & white, but that was not the case at all. As with his giallo The Girl Who Knew Too Much in 1963, he still manages to do marvelous things with shadow and in camera effects. This film has more of a traditional Gothic narrative to it, seemingly emulating the popular Hammer films of the era, as well as the Universal classics before them. Those sensibilities mixed with Bava’s raw visual flair made for a very interesting hybrid. 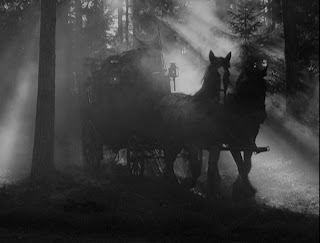 Star Barbara Steele holds nothing back, showing us why she was dubbed a Queen of Horror. She does a great job playing two characters that are exact opposites, and I implore you to take your eyes off hers when she is onscreen. I find it sad that this was unfortunately the only time she ever worked with Mario Bava.

For a film made in 1960, I found it remarkably more gruesome than I expected. Italian horror’s obsession with eye trauma – in addition to Un Chien Andalou of course – can likely be traced back to this film. Apparently, I’m not the only one who noticed the gore, as Black Sunday’s distributor, the iconic American International Pictures, also had several reservations about the content. For its domestic release, a full three minutes was cut from the film, but it has since been fortunately restored in subsequent video releases.

As with Black Sabbath – and most Bava pictures for that matter – there is barely a single scene in Black Sunday that didn’t influence scores of filmmakers. It's certainly not hard to see why the opening sequence, where Steele is violently put to death, was burned into the minds of many an artist.