There were several off site events going on during the Expo, of which I attended two. With Tony Todd being in town, it made perfect sense to hold a screening of Candyman down at the ol' Lightbox. 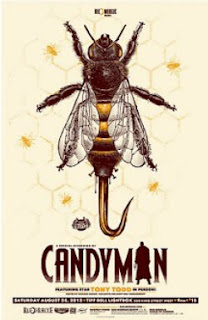 From what I hear, it took a little finagling to get the 35mm print we watched that night, so big props to those who made it happen – you know who you are. It was a nice print too, and who knows, maybe this was the first time it had been unspooled since its run back in 1992.

It had definitely been a while since I'd watched it. I'm not sure if I saw it during its original run, but I certainly watched it a few times on VHS. The Bloody Mary urban legend was a very powerful thing during my childhood, and Candyman played off that same fear beautifully.

Looking at it now from a filmmaking perspective, I'm quite impressed by the technical prowess of this film. The cinematography is solid, including several aerial shots that really showcase the city of Chicago.  I'd also forgotten how amazing the score by Philip Glass is, as well. 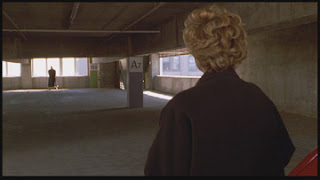 Todd's performance as the sinister, yet sullen Candyman is hypnotic, though I think by design the film itself is, as well. The early nineties were a special time for genre movies. Some filmmakers were trying to shirk the slasher and creature feature boom of the eighties and go for something a little more cerebral. In addition to Bernard Rose, two other likeminded individuals were Adrian Lyne and Jonathan Demme. The former made the nightmarish fable Jacob's Ladder, and the latter would sweep the Oscars with The Silence of the Lambs.

These films had weight, and it's because they involved relatable protagonists in grounded realities, who come into contact with extraordinary forces, whether they be supernatural or otherwise. I yearn for those days.

After the film, Todd took the stage and talked for a bit.  He recalled being in Toronto twenty years ago, to premiere the film at TIFF's Midnight Madness.

When asked about shooting the scene with the bees, he said it was very uncomfortable as he had to wear a dental dam with the bees inside it so they would then crawl out his mouth. He felt more sorry for Madsen though, as she was allergic, so stingerless baby bees had to be used for her scenes.

Someone asked about where the chemistry between him and Madsen came from;

“Well, we spent a lot of time together before the shoot. We took ballroom dancing, went horseback riding, did some fencing, all sorts of things, so that we'd be really comfortable together.”

Todd was asked about his burgeoning voice acting career, to which he said his role as The Fallen in Transformers 2 led to multiple gigs in the video game industry, including the upcoming Call of Duty: Black Ops 2.

Todd also plugged his new movie Sushi Girl – which will be playing the Toronto After Dark Film Festival in October – as well as a feature he is writing and directing called Catalytic.

The second special event that weekend was the Rue Morgue Shocktail party which featured a rare performance from composer Alan Howarth. For those who don't know who he is, he has worked on some of the most memorable horror scores of all time, including Christine, Prince of Darkness and They Live.

There were unfortunately some technical difficulties during the show, but I can't deny there were points during his set that gave me chills. Here's a small sampler of what transpired.

So, that's all she wrote. It took four posts, but I think I've covered all I was a party to. Now, only a week to breathe before the Toronto International Film Festival is upon us. I'll be seeing a record number of films this year, so stick tuned for my thoughts on the new crop of horror offerings.
Posted by Jay Clarke at 10:00 AM