What Is A Ferox, Anyway?

Since the opening of the TIFF Bell Lightbox, it has become a vertiable hub for all manner of film-related events. As Toronto continually plays host to countless filmmakers working in the city, it makes sense that such an environment would lead to some very special and unique events. This spring saw an extremely successful run of Alfred Hitchcock films presented by director Guillermo del Toro, and things have snowballed from there.

The latest of these events was Monday's screening of Umberto Lenzi's Cannibal Ferox, presented by director Eli Roth. Roth is currently in town working on his upcoming project for Netflix called Hemlock Grove and spent some time speaking with Midnight Madness programmer Colin Geddes about the film and its infamy. Say what you will about the man and his movies, but there can be no question that Roth knows his shit. He is a horror film scholar and during his intro broke down the origins of one of horror's most shocking genres. 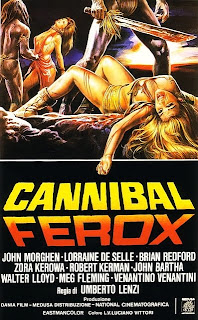 He also took a moment to dedicate the screening to Sage Stallone, who recently passed away. Stallone was co-founder of the video distribution company Grindhouse Releasing, which was instrumental in the restoration of such horror classics as The Beyond, Pieces and the film we were there to watch that evening, Cannibal Ferox.

Below, is the Q&A that followed the screening. He delves deep into the mystique of the cannibal genre, as well as giving you a good idea of the stuff he is planning over the next few years. Enjoy!