One of the highlights of this year's trip to Fantasia was partaking in the sophomore voyage of The Horror Express. Created by author and cinephile Kier-La Janisse, this wonderful venture began last August in Toronto where she took a busload of people around to a dozen genre movie locations around town. This time, along with co-host journalist Mike Gingold, we toured Montreal.

We began the day at the old brownstone which saw Peter Weller battle a giant rat in Of Unknown Origin. I checked out this spot last year - along with the estate from Cathy's Curse - on my way out of town last year, but it's always terrific to see, especially because it's right downtown and most people don't even realize it's there. 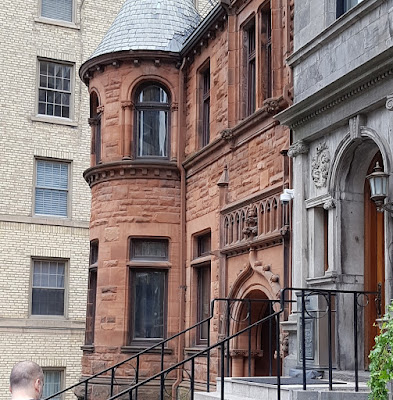 As with the Toronto tour, David Cronenberg loomed large over the proceedings.

For the latter movie, I was shocked to learn that the D.B. Clarke, a theatre I had been in a few times over the last twelve years, was actually the site of the iconic head explosion scene. And speaking of ol' Ironside, we drove a bit out of town to check out these digs.

In between the more well-known spots, we also checked out some from more obscure tax shelter flicks, like The Blue Man, Sweet Movie and The Disappearance for which architectural marvel Habitat 67 was home to Donald Sutherland. 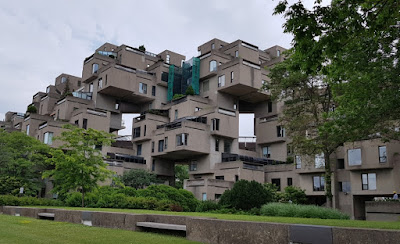 Other cool locations included the high rise building that Karen Black threw herself off at the beginning of The Pyx and the Crawford Academy from Happy Birthday To Me. 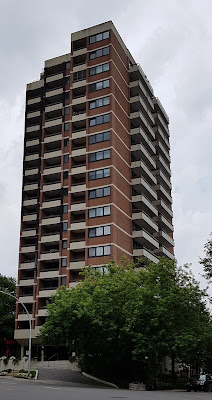 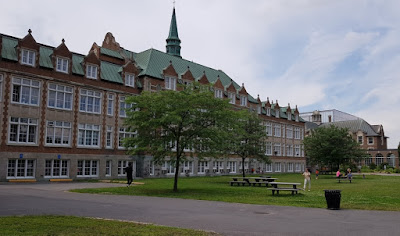 In the end, we visited about eleven locations over six hours. I imagine the next two iterations of The Horror Express will be in New York and Los Angeles for which I'll likely miss, but I'll sure try my best because these tours are the best.
Posted by Jay Clarke at 10:00 AM