And So It Begins Again...

I love this time of year. Well, I love everything except the sack shrinking cold, of course. Not only is it the Christmas season - which brings time off work to spend with family & friends and consume all sorts of things that aren't good for you - but the film festival cycle is gearing up to resume once again. December brings tidings of the Sundance Film Festival, which runs the following January in Park City, Utah. My list of must-see festival flicks of 2008 are mostly crossed off at this point (Timecrimes, Eden Lake and My Name Is Bruce are the last), so '09 lies before me like an undisturbed field of newly fallen snow. This year's Sundance offers these three new titles to look forward to in the coming year.

I'd been hearing about this Norwegian zombie romp called Død Snø (Dead Snow) for quite a while and now it is just around the corner. The trailer below says it all. 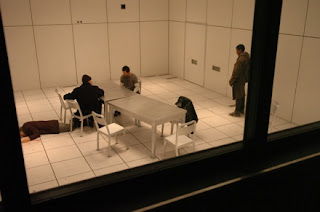 The premise of The Killing Room - about four people volunteering for a research study being exposed to something a lot more sinister - sounds interesting, but the fact that it is directed by Jonathan Liebesman (the TCM prequel, Darkness Falls) doesn't instill me with confidence. Also, anything with Peter Stormare has a high possibility of turning into a cartoon whenever he's onscreen. I'm hoping the producers printed up a big sign saying "sometimes less is more" and made those two stare at it each day before shooting.

Lastly, Grace is about a young pregnant woman (Jordan Ladd) who loses her baby, but insists on having it anyway. When the baby comes to life after delivery, it is considered a miracle, but the mother soon realizes that Grace is no ordinary infant. I'm glad Ladd is still kicking around after a fairly inactive 2008, following small appearances in two flops the previous year. This looks like the kind of role where she really has the chance to shine.

As always, thanks be to Twitch for keeping me apprised of all things strange and off the beaten path.
Posted by Jay Clarke at 6:04 PM