Look For The Nines

For this month’s selection, here’s something I just recently watched after it having been on my DVR for months and months. 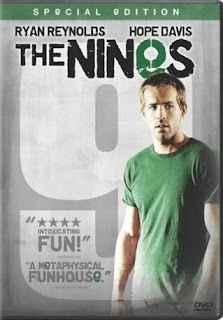 In The Nines, Ryan Reynolds plays three different characters – Gabriel, a video game designer, Gary, a burned out actor and Gavin, a successful television writer – in a trio of interconnected stories.

I have to say that Ryan Reynolds really impresses in this movie. He is in almost every scene and excels in bringing three distinct personalities to the screen. The small supporting cast of Melissa McCarthy (who I’d never seen before and really liked here), Hope Davis and Elle Fanning are all complimentary, as well. The Nines reminded me a little of Brad Anderson’s The Machinist, with its recurring themes and carefully constructed release of information. The story is very strong and although similar subject matter has been explored previously, I’ve never seen it handled in such a character driven and grass roots manner before. Writer (and first time director) John August had taken a giant leap forward here, as his usual output is decidedly lighter fare. The Nines just works on so many levels and is one of those films that your mind will be playing around with for days.

It is this kind of smart filmmaking that should be celebrated and not shelved like it so often is these days. If you are walking through the video store or sifting through your on-demand list, The Nines is the perfect little gem for people who like a little weight with their entertainment.
Posted by Jay Clarke at 5:14 PM