The end of the another year is upon us. I didn’t feel 2008 was as strong as the previous year – ’07 had five definite winners that I would all go to the mat for – but still had its share of excellent content. Let us begin with my top five of this past year.

Let The Right One In
Sweden, Dir: Tomas Alfredson

The only genre title that really, truly blew me away this year was this Swedish vampire flick. This is a feat of extra magnitude considering how high expectation was by the time it rolled around my neck of the woods in October. LTROI is part art house flick, part vampire romp, part coming of age story and is executed so beautifully, it made me proud to be a cinephile.

4bia is an incredibly fun Thai anthology that gave me a bit of everything. There are two stories stacked with scares in true Asian horror fashion as well as a comedy horror tale that is as funny as anything Hollywood has proffered in this post-Scream era. The segment ‘Tit For Tat’ suffers from terrible CGI and inadvisable editing, but doesn’t kill the production as a whole.

I still look back on my midnight screening of Cloverfield with absolute fondness. People tend to forget the films that come out at the beginning of the year when making their best-of lists. I do not. JJ Abrams somehow managed to produce this blockbuster in absolute secrecy – a near impossibility in this day and age. A lot of people were turned off by the nausea-inducing camera style, but I think the idea of filming a giant monster movie from the ground was a stroke of genius. 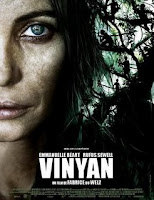 This film hasn’t technically been released here yet, but has had a run in Europe. Du Welz’s spiritual remake of the 1976 film Who Can Kill A Child? (and follow up to his debut Calvaire) has everything going for it. It is a haunting and devilish feast for the eyes and ears, with excellent performances from leads Rufus Sewell and Emmanuelle Béart. Keep your eye out for it when it appears in your area in ’09.

Haneke’s second go-round is as ugly and affecting as his original 1997 version was. Always the manipulator, he flips off the audience and never makes them comfortable with the subject matter he lays out. Considering I had already seen Funny Games going into this – and this version is a virtual shot-for-shot recreation of the original – I was surprised by how much the addition of Tim Roth and Naomi Watts made me connect with it. I’ve said before that my emotional involvement in a movie has a direct correlation with the actress onscreen and thus made Funny Games ’08 possibly even more difficult to watch.

Although I did enjoy both Quarantine and The Strangers a great deal, I couldn’t help but feel they were lesser versions of foreign films that were on my top five list last year.

Fever Dreams’ duo of Machine Girl and Tokyo Gore Police were perhaps the most consumable offerings presented to me this year. Machine Girl and I have concluded many drunken evenings together and TGP is one of the only films I can say I have seen in two different provinces. What is it about Asian girls in uniform and arterial spray that go so well together?

There can be no doubt that Martyrs is a nasty bruiser of a film. You will feel as beaten down as the protagonist by its end. However, for all its shocking ugliness, I ultimately didn’t feel that it had the thrill-ride gratification of its French predecessors like Inside and High Tension or the dark artistic brilliance of gut punch champion Irreversible. Martyrs was redeemed in my eyes when it showed its true colours at its conclusion though.

I know several people who weren’t all that impressed by The Ruins, but I really liked it. Having not read the book it was based on, my only frame of reference was what was onscreen. I think the fact they cast strong young leads, employed a strange, new locale and didn’t skimp on the gore, made this really stand out to me. Unfortunately, some bad CGI – some of those vine effects looked like they were drawn with MS Paint – did take away from it a bit.

And now, the worst. Continuing my policy of just avoiding films I think will be shite, things worked out fairly well in 2008. Alas, even with all those defensive measures in place, I still wasn’t able to avoid Deadgirl or Wicked Lake. But as much as I disliked those two, the distinction of worst film of the year goes to M. Night Shamalamadingdong's The Happening. This movie was just a parade of bad decisions with every cast member walking around in a daze, following a bunch of clumsy setups with no payoff. The Happening is not even good-bad. Sadly, I think it may be time, after his last trio of laughable attempts at cinema, to put the little guy down.

Is it crazy that I still won't pull THE HAPPENING off my Zip list?

Not quite crazy enough to make you want to lie in front of a riding lawn mower, but pretty close.

By all means, watch it. A hearty point-and-laugh session is good for the soul :D

It's not as crazy as actually enjoying the guilty pleasure like yours truly. :P

Great list Jay! I love seeing different opinions....and I apologize in advance for my TGP backlash on my list! :P