So, let's move onto some more recent efforts, starting with Daniel Myrick's 2008 film The Objective. 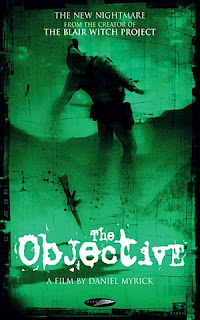 CIA Agent Keynes leads a Special Ops team into Afghanistan on a top secret mission. When they find themselves inexplicably lost in the desert, strange things start to appear.

The Objective – as you might expect from one-half of the Blair Witch team – is another slow-burn of a film. Myrick keeps his cards even closer to his chest than Sánchez does when it comes to the revealing the goods. That's not to say it's not engaging though. I think the Afghan locale has a lot to do with it my case. Genre films set in countries I would never venture to – 2007's The Passage is another example – always put me on edge. The ensemble cast, including real-life Green Beret Matthew R. Anderson and stuntman/actor/director Jeff Prewett are all solid and work hard to define themselves. This is a difficult task considering everyone is wearing fatigues and are not easily distinguishable. Mike C. Williams shows up again in this, though his part was not as substantial as it was in Altered. 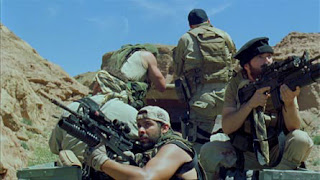 I could look back on The Objective and say that not much happened, but there are some really crazy WTF moments that really spike the film. I was a little iffy on the ending, but I think that was more to do with personal preference than quality. Myrick's choice to skirt the line between the supernatural and scientific is quite admirable and I'll leave it to you to decide whether it worked or not.

For people who like films that take their time, you might want to make The Objective a priority.
Posted by Jay Clarke at 12:10 PM