This month's Final Girl Film Club selection is a movie that I wasn't familiar with, though probably should have been. With the zombie sub genre being one of my fortés, you'd think I'd have already seen Andrea Bianchi's Burial Ground: The Nights Of Terror. That's the thing about Italian horror cinema from that era though; the well goes deep. Having mildly enjoyed one of Bianchi's other films – Strip Nude For Your Killer, chiefly due to star Edwige Fenech – and being a notorious sucker for any zombie flick, I gladly said bring it on. 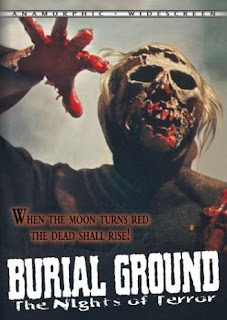 Professor dude with mad beard-growing skills awakens a zombie horde while on a dig of some sort. Oops, he dies before he can tell his associates who then show up at the nearby villa. The usual flesh eating shenanigans ensue.

The usual terrible dialogue and overacting are on full display here, but are nicely countered by some T&A and gruesome set pieces. I wouldn't except anything less from an Italian horror production from this era. The characters in this movie are of the massively stupid variety and seem to go out of their way to make the wrong decisions. However, after a while I guess that becomes part of the fun, doesn't it?

“Let's get the car! Oh no, there's one or two slow-moving zombies next to it, the five of us couldn't possibly put our heads together and come up with a plan. Quick! Back to the villa (aka death trap)!”

I also have to take this opportunity to point out Peter Bark, who plays Mariangela Giordano's son. I've seen creepy man-children (with hilariously dubbed man voices) in Italian films before, but this guy takes the cake. 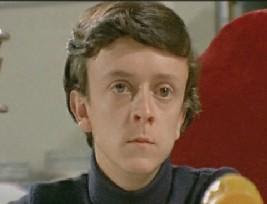 I have to admit I'm a little torn about whether the zombies suddenly transforming from brain-dead shamblers to highly skilled ninjas halfway through the film makes Burial Ground more ridiculous or more awesome. While the meandering camera shots of the zombie masses don't seem as tedious as other offerings like Shock Waves and Oasis Of The Zombies, it can be a little frustrating at times. To its credit, Burial Ground shares a lot in common with Lucio Fulci's Zombie (Zombi 2). Most important of these is they both feature the gruesome stylings of legendary effects man Gino De Rossi. His fingerprints are recognizable almost immediately, and working with Rosario Prestopino they craft some great stuff. 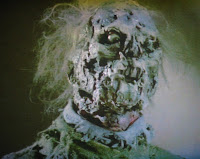 Ultimately, I don't think Burial Ground is as memorable and iconic as Zombie. I mean let's face it, its zombie vs. shark sequence is hard to beat, as well as the ocular mutilation scene... wait a minute! 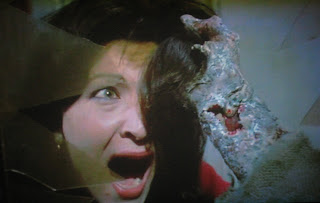 Overall, this is a pretty fun watch, but I do wish they could have made it tighter somehow. It's less than ninety minutes, but it does tend to drag in parts. Nevertheless, Burial Ground does spike enough to understand why the film has acquired the following that it has.
Posted by Jay Clarke at 8:05 AM