The next title I watched on Time Out Best 100 List was Hammer Films 1958 staple Dracula aka Horror of Dracula. I know it may seem odd that I'd never seen this movie, but, when it comes to Hammer, I've always gravitated to the more female-centric titles in their catalogue. Shocking, I know... 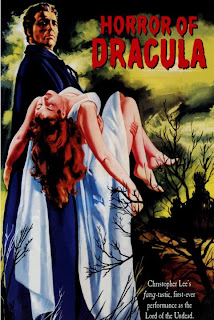 
Watching Dracula was a pleasurable experience, but I can't help but feel this is one of the more dated entries on the list. Having said that though, there was plenty of stuff to love. Director Terence Fisher puts his workman-like stamp, that served him so well throughout the fifties and sixties, on the proceedings by beautifully transporting us back to the end of the nineteenth century. Not surprisingly, Cushing is the shit in this film. Much like his performance in Fisher's creature feature Island of Terror eight years later, Cushing  takes charge of the situation and does what needs to be done.

If I had one gripe about the film, it was how little Dracula was actually in it. Lee comes in at the beginning and, after dispatching Harker, steels away for a good chunk of the film. Apart from briefly ravishing a few damsels in distress, we don't see Dracula again until his final confrontation with Van Helsing and his compatriot, Arthur (Michael Gough). I know this was the first in a long line of Dracula films featuring Lee, but considering he is the title character, I figured he'd have more screen time.

Hammer Films are a huge part of the horror canon and have inspired countless filmmakers, so I cannot contest the inclusion of Horror of Dracula on the Time Out list. Though I may not value Hammer as highly as some, I fully recognize their artistic importance.
Posted by Jay Clarke at 10:00 AM

Think Dark Skies is going to be any good?

I don't hold out much hope for it, the trailer induces laughter rather than chills.

I think I'll just re-watch Fire In The Sky instead.