Viewing the next entry on the Time Out Best 100 List, Jacques Tourneur's 1957 film Night of the Demon, turned out to be quite the adventure. It began with a trip to the video store (yes, they still exist) that netted me a copy of a Z-grade eighties flick about a killer Bigfoot which shared the same moniker. I knew almost nothing of Tourneur's film, but the moment this other one flashed onscreen, I knew there had been some egregious error made. So, after a humble exchange, I finally got my hands on the right demon. 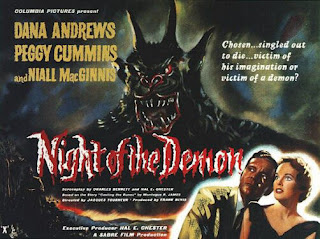 While attempting to expose shady cult leader Julian Carswell (Niall MacGinnis), psychologist Dr. John Holden (Dana Andrews) becomes the target of a powerful demon curse. Always the skeptic, Holden dismisses the idea until some inexplicable events begin to convince him otherwise. Aided by the niece of a former victim of the curse, Holden races against time to stop Carswell's evil deeds once and for all.

Night of the Demon is a perfect example of great storytelling. It is a straightforward, dialogue driven and expertly executed tale. The strength of this film is the rivalry between Holden and Carswell. There is a real battle of wits between these two which culminates in a final confrontation on a train car which I absolutely loved. These kinds of exchanges are so rare in film these days and really exemplifies how filmmaking has changed over the last fifty years. It seems nowadays that studios feel there needs to be a grand gesture every ten minutes to keep the audience interested, when they should be concentrating on enthralling us for the nine-minutes and fifty-nine seconds previous and thus making time irrelevant.

Much to my surprise, I almost immediately noticed that this film was the template that director Sam Raimi used for his 2009 horror flick Drag Me To Hell. If you replace the loan officer and gypsy characters with a psychologist and cult leader, you basically have the same story. Even both climaxes take place at a train station. In tone and aesthetic, these two are obviously polar opposites, but I can't believe this comparison wasn't made more often upon Drag Me To Hell's release. This isn't a condemnation you understand, as this type of thing is common practice these days, just an observation.

However, as good as Night of the Demon is, I have to admit being a little disappointed with the actual Demon. It looked rather rudimentary, but it was somewhat offset by the cool-looking smoky visual effect that signalled its appearance. I did a little reading and found out that the creature was later added in against Tourneur's wishes by producer Hal E. Chester. I'm afraid have to side with Tourneur on this one.

There is no question that Night of the Demon should be on the list. All the cornerstones of a great horror story are present and accounted for here. It has solid performances and a sense of dread and immediacy brought on by concise storytelling, rather than bells and whistles.
Posted by Jay Clarke at 10:00 AM

Hello, congratulations for you blog. We are Essi Girano, a group of film production, that is about to make a short horror movie "The Long Night of Victor Kowalsky", a fim based on a series of Nightmares one inside the other, that have on the background a mystereous TV Show. If you are interested, have a look to our blog and our faebook pages, or write us at info@essigirano.it for any extra question about the project
http://essigirano.blogspot.it
http://www.facebook.com/victorkowalskyfilm