I watched a German animated film called Felidae last weekend, and boy has it been on my mind ever since. 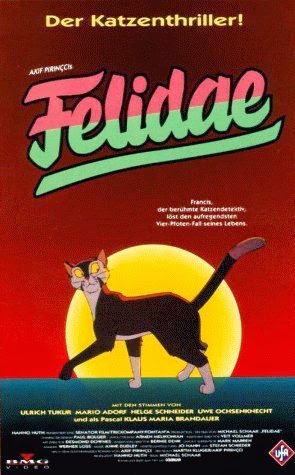 Francis, an inquisitive house cat, moves into a new neighbourhood with his owner and immediately learns of a rash of local cat murders. Despite the danger, he goes about trying to solve the crimes.

If The Secret of NIMH, The Plague Dogs and a giallo had a three-way, I believe the result would be something approaching that of this movie. Based on the 1989 novel of the same name – the Latin term for the feline family – Felidae is certainly NOT for kids. I had to wonder to myself while watching this just how many German children were traumatized by this film that features all manner of grim death including decapitation, evisceration and electrocution. For those who gravitate toward stuff with more of an edge than the sugar coated stylings of Walt Disney, Felidae is among the cream of the crop.

I never thought I would see another animated film that would be as disturbing as the aforementioned Plague Dogs, but here it is. My mouth fell open on a few occasions because it had been so long since I’d seen subject matter – really shocking and disturbing stuff – presented in this manner. It was truly disarming.

I loved the animation style of this film, as it reminded me a lot of my favourite visionary, Don Bluth. This applies to not only the personalities and mannerisms of the characters (Francis, Blaubart & Felicitas especially), but also the fantastic action set pieces. Coming in at under eighty minutes, the pacing was also very good. Felidae builds a world, separate from the one we know as humans, yet still functions alongside it. There was a lot of exposition put forth over this time, and I was surprised at how intricate a mystery was contained in this initially innocuous cartoon.

I’d love to own this movie (especially on Blu-ray) but sadly the only English release of this movie is dubbed. There is a decent subtitled version on YouTube though, which I have embedded below.


To be honest, I was a little floored by this movie. Felidae stands wonderfully alongside classic subversive animated films like Wizards, Heavy Metal and Fritz the Cat, featuring images you won’t soon forget.
Posted by Jay Clarke at 10:00 AM