Growing Up Is Hard To Do.

After a sizable break, I was finally able to dig into the second episode of The Walking Dead game's sophomore season entitled A House Divided.

I was happy that in this episode Clementine wasn't in as much direct danger, as I needed a breather after the intensity of All That Remains. This episode dealt more with relationships and inter-group politics, of which Clementine often had to act as mediator. In fact, it was during A House Divided that I realized just how much she has grown over the course of this series. Her dialogue tree options are nothing like they once were. Clementine now challenges and deflects in a manner far beyond her years. She has become an active member of the group, rather than a liability and is no longer the timid little girl Lee rescued from her tree house a lifetime ago. 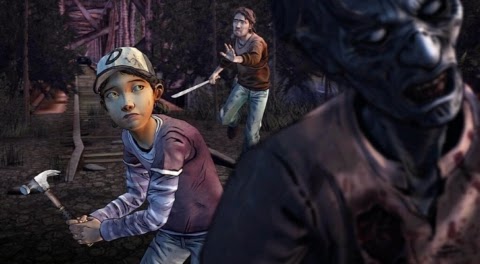 Speaking of the group politics, I am continually impressed with how Telltale manages to keep the dynamics fresh. The story is constantly serving up interesting dilemmas and rarely gives you an easy choice. Negotiating the ensuing situations is tricky business, especially considering you have no control over the actions of the other characters. And it doesn't help that certain individuals seem predisposed to making the worst decisions possible. It's then always up to you to put out the fires. It's a lot to ask of an eleven-year-old, wouldn't you say?

There were some nice surprises this episode, as well. When the new villain Carver, first mentioned in the previous episode, showed up, I recognized the gravelly voice of Michael Madsen almost immediately. The first meeting between him and Clementine was fantastic and rivalled Hollywood production in its pot boiling intensity. It was also good to see the return of a character that was thought long devoured. Of course, the jubilation was short lived because it then brought up instant loyalty issues between comrades, old and new.


The last set piece of the episode was, again, top notch. I, unfortunately, fucked things up good during my playthrough though. However, now knowing how the mechanics work, I'm sure I would've ended up in the same spot regardless, it just may have been less my fault.

Anyway, I'm even more excited to see where things go from here. Keep up the great work, Telltale!
Posted by Jay Clarke at 10:00 AM