A Horse Of A Familiar Cover 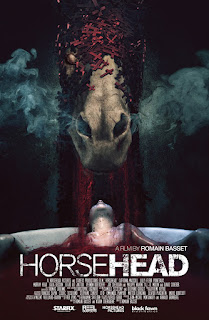 When Jessica (Lilly-Fleur Pointeaux) returns to her childhood home for her grandmother's funeral, she is stricken with a fever that plunges her in a dream world that may unlock secrets from her past.

Horsehead came to my attention this year when it was picked up for Canadian distribution by Black Fawn. All I really knew about it was inspired by the classic Italian horrors of Dario Argento and Mario Bava, so I was going in fairly cold when I popped into my PS3.

I dug this film. Knowing of the Euro-horror influences, it didn't take me long to clock into the tone they were going for. Steeped in dream logic, I felt the world Basset created within was very well realized. In structure, Horsehead reminded me a little of Bernard Rose's Paperhouse in that Jessica is bedridden by fever and the tale mostly unfolds with her dream world. In terms of style, even without forewarning, the references to seventies Euro-horror were obvious. There were some shots that looked like they were ripped straight from Suspiria, which makes sense considering the protagonist in that film (coincidentally played by “Jessica” Harper) also spends a good amount of time in a drug-induced stupor.


I think what I most appreciated about Horsehead was that even though so much of it took place in a dream world, it still remained, for the most part, coherent. It pays tribute to the films that came before, but also forges its own way. I feel this is what I was missing from the past works of Hélène Cattet & Bruno Forzani (Amer, Strange Colour) in that they had a tremendous grasp of the aesthetic, but it stopped there. I'm not saying that Euro-horror ever gave priority to narrative, but Basset offered a lot more to work with than Cattet & Forzani ever have.

No, Horsehead is more than just an imprint. It goes beyond atmosphere. It has wonderful little character moments, much like the early Argento gialli had. It was wonderful to see significant horror figures like Lucio Fulci muse Catriona MacColl and Philipe Nahon (the lumbering maniac form 2003's High Tension) show up here. I also can't go any further without mentioning the rather striking lead actress, Lilly-Fleur Pointeaux. The role was pretty demanding, physically and emotionally, and she pulled it off in enchanting fashion.

I really can't overstate how gorgeous this film looks though. It has some of the best lighting I've seen in a good while, and the production design is top notch. I mean, some of it had to do with their location, but the interior stuff was incredibly layered, as well. I thought the music was solid, save for one jarring sequence where it felt like Skrillex showed up in the mixing booth one afternoon and took over. It feels at odds with the rest of the score.

For such a small affair, the Blu-ray package itself offers more than the usual I was happy to find. There is an hour-long documentary included, which gives you an idea of how dynamic the shoot was. I was quite impressed with all the crew and equipment they were able to wrangle, considering the director mentioned several times it was “made with friends for no money.” I wager this is hyperbole, as one does not come out the other side with something so polished, if that were the case.

On the Artsploitation Films release, the disc also includes four of Basset's earlier short films, my favourite of which was Remy, about the bond between grandson and grandfather.

Euro-horror revivalism is a thing that has been going on for a few years now and I think Horsehead is one of the better I've seen. It uses that era's familiar palette as a base, but goes beyond mere mimicry to weave a captivating and surreal mystery.
Posted by Jay Clarke at 10:00 AM