For those who saw Miguel Ángel Vivas' 2010 feature Secuestrados (aka Kidnapped), I bet you likely never forgot it. It was unapologetically dour and its final frames still rattle around in my brain several years on. Aside from that though, the film was a technical marvel, consisting of a dozen extended shots stitched together into a feature length thriller. So, when I saw that Vivas' new project Extinction was playing Fantasia, I knew I had to see it. 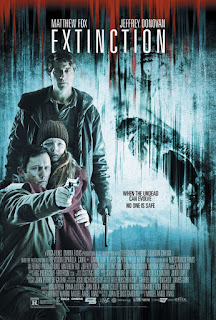 Holed up in a pair of cabins in the mountains while awaiting the end of the apocalypse, Patrick (Matthew Fox), Jack (Jeffrey Donovan) and his daughter Lu (Quinn McColgan) realize that the zombies might not be as dead as they thought.

I found Extinction to be surprisingly solid. When I say surprisingly, I mean that the premise sounded so overdone that I was skeptical Vivas would be able to bring anything new to the table. But he did. Unlike a lot of post-apocalyptic stories, it doesn't get bogged down in the hows and whys, it just concentrates on the here and now. I found the structure of how the last two men (quite possibly on the entire planet) who can't stand to look at each other, yet still remained neighbours at the end of the world to be really interesting. That's not to say that it's completely fresh, as there were whole sections where it felt like other material (The Walking Dead, 28 Weeks Later and I Am Legend being the most prominent), but Vivas was always able to bring it back with some wonderful character work.

And that is one of the two strengths of the film, the relationship between the three main characters. Orphaned from the television roles that made them stars, Jeffrey Donovan & Matthew Fox were terrific and their end-of-the-world gruffness was nicely counteracted by their child co-star Quinn McColgan. Young actors like McColgan come along very rarely, so expect to see a lot more of her in the future.

The other strength was the technical prowess of Vivas that I alluded to earlier. He makes the snow covered exteriors look beautiful despite utilizing very little colour in his palette. I was also glad to see that he didn't totally abandon his penchant for long takes, as there is a memorable sequence where the camera tracked down, going through the three floors of the cabin during the climax. I have to admit there was a bit more CG than I would've liked (hence the Legend reference), but there were also a good amount of practical creature effects to balance it out.


I fear that Extinction could get lost in the sea of other zombie/post-apocalyptic offerings (a situation certainly not helped by the blasé poster) and that's a shame, as I feel this has a lot more to offer than the majority of genre chaff that gets released. Fortunately, Extinction releases soon (July 31th on VOD) so hopefully you'll give it a look and decide for yourself.
Posted by Jay Clarke at 12:00 PM