The haunted house horror We Are Still Here was another SXSW darling that was screening at Fantasia this year. After establishing himself as a writer and producer (most recently on The ABC's of Death 2), I was very much looking forward to seeing Ted Geoghegan's first stint in the director's chair. 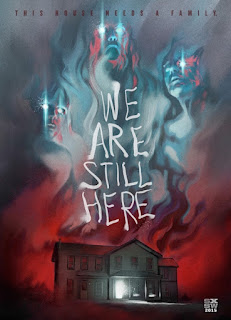 Grieving parents Anne (Barbara Crampton) & Paul (Andrew Sensenig) retreat to an old house in New England only to find it may be haunted.

We Are Still Here was a very enjoyable affair. Geoghegan is another cinephile who grew up during the home video era and you can tell where his influences lie, most prominently the work of Lucio Fulci. Aside from the neat callbacks to The Beyond – there is no Joe the Plumber, but there is a Joe the Electrician – this film has huge helpings of House by the Cemetery.

I thought this film was really well made and featured a strong core of actors who've worked with some of the most exciting genre filmmakers in the business. In addition to genre veterans Barbara Crampton & Andrew Sensenig, you also had indie icon Larry Fessenden who adds energy to every project he appears in.

The thing I liked most about We Are Still Here was that Geoghegan was able to incorporate the best of both worlds. The majority of the film was reserved and atmospheric and then built to an explosive crescendo of gore. I have to liken it to Ti West's 2009 effort House of the Devil, except We Are Still Here boasts a satisfying conclusion.

It is more credit to the film that I still had a positive experience despite the obnoxious asshole sitting behind us at the screening. Being enthusiastic during a movie is one thing, hooting and hollering at every little thing is quite another. As my friend put it, it was like he'd never seen a horror film outside of his living room before and had been waiting his whole life to witness one on the big screen. It's a dilemma because can't you really call someone out for being excited, especially when the director specifically encouraged the crowd to be vocal in his intro. I don't know, maybe I'm just an old man shaking his fist at a cloud.


Regardless, Geoghegan's debut is an impressive little ghost yarn that finds just the right balance between freshness and homage. His intent was to create something that would not feel out of place on a video store shelf circa 1983 and he has done just that.
Posted by Jay Clarke at 1:35 PM