If It Looks Too Good To Be True...

[EDITORS NOTE: Greeting to all the cuckoo nutsos who dropped in from Final Girl's Film Club link. The House of the Devil is a movie that has stuck with me over the last year. Though I'm still not crazy about its conclusion, its unrelenting atmosphere is something I find really special.]

A film that’s been burning up the festival circuit of late is a little number called The House of the Devil. This is the new film by director Ti West, who you might remember from 2005’s The Roost. The Roost was an indie that I remember fondly for making something out of nothing. It is quite evident now after seeing THOTD that West’s first (and perhaps sole) priority is atmosphere. 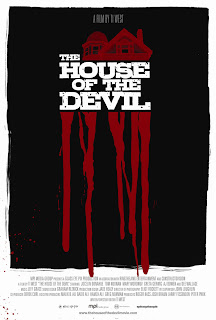 Destitute student Samantha (Jocelin Donahue) thinks she’s making a killing on a babysitting job she found on a campus bulletin board. If she only knew that her employers have something else in mind for her.

First off, I want to say that The House of the Devil has a fantastic aesthetic. It is set in the early eighties and really nails the look of the films made around that time. It seriously feels like something I could have rented when I was a kid. This is further reinforced by the great soundtrack. I have to admit watching Samantha dance around the house while listening to The Fixx’s One Thing Leads To Another on her Walkman was pretty darn awesome. Where else but the eighties would you be able to get away with something like that? THOTD is, based on feel alone, probably one of the best nostalgic horrors I’ve seen. It has merit just for that. 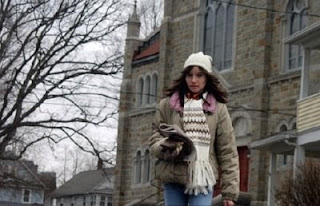 As far as everything else goes, the movie falls a little short. The main problem with The House of the Devil is that it just runs out of steam. West spends an immense amount of time with the setup, but does not have the payoff to match. It’s a real shame and incredibly frustrating. Another thing that threw me was that Samantha’s motivations seemed a little muddied at times. It could have been that I had a few beers in me, but I’m pretty sure that if creepy couple Tom Noonan and Mary Woronov want to give me four hundred dollars to ‘babysit’, you should probably be heading for the door. 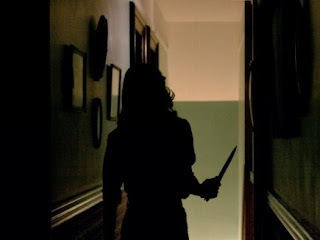 The House of the Devil bears a striking resemblance to Jonas Barnes & Michael Manasseri’s 2008 film Babysitter Wanted – which I saw recently, but was too lazy to review. However, even though their setup and locale are the same, they are the exact flipsides of each other. I found Babysitter’s third act more satisfying, but its presentation (except for one particular shot that I’ve seen on one of its posters) is pretty bland and low-rent. I’m reviewing THOTD though, so that should give you an idea of which one made the bigger impression.

In the end I think it comes down to preference. A film like Babysitter Wanted is likely more accessible, but for fans of the American horror flicks of the late-seventies and early-eighties, I’d be willing to bet you’ll get a kick out of The House of the Devil. Well, the first seventy-five minutes of it anyway.
Posted by Jay Clarke at 10:15 AM

Another review fails to mention the incredibly hot pizza eating skills of Greta Gerwig! I can't believe it.

I'm really surprised by all of the lukewarm reviews that are starting to come out for HOUSE OF THE DEVIL. Criticisms of the believability of the situation are a bit silly I think, because West is clearly aware of it. The AMAZING payphone scene early on in the film sets the tone and I don't think it falters at any point.

And as far as the brevity of the climax... Sure it could have been drawn out a bit more but I love it the way it is. I don't think that it would have improved the film any for it to have been more on the torture-side of things, and for it to have been larger in scope wouldn't have geled with the rest of the film.

Yeah, that was a big pizza slice wasn't it?

To be honest, I don't know HOW the end could have lived up to its stellar first half for me, but good to hear it delivered for some.

And I'm surprised by the rabid praise for this film, the last act falls completely flat, there's no pay off (and I don't mean gore), AND they are the worst Satanists ever! How hard is it to tie a waify girl down! :D

lovin the movie so far, two things are driving me nuts. How true is the plot and when will something happen? Oh wait something is going on ( dead people )! Lovin the creepy stranger who also delivers the pizza!!! Go Comcast, pay per view before it goes to the movies.

I thought this was just terrific! Director West perfectly captured the vibe of early 80s horror. For those who complain about the lack of carnage or the brevity of the ending you're missing the point. Watch movies from that era and you'll find that they were all like this. I particularly loved hearing The Fixx's "One Thing Leads to Another" while Samantha danced around the creepy house.

How can hoping for a satisfying ending be 'missing the point'? I will relent that over the past few months this movie has stayed with me, so clearly the pros far outweigh the cons.