Sorry this one's a day late, but better late than never, right?

For those unaware that the long awaited Halloween anthology film Trick 'r Treat (finally dropping on video this October) was originally based on animated short that director Michael Dougherty made in 1996, here it is below.

You remember the disappointment when Icons Of Fright cracked the story that the DVD & Blu-ray issues of the excellent Swedish vampire film Let The Right One In released with an inferior subtitle track? Well guess what I discovered last week? The Movie Network (Canada's version of HBO) has been playing Let The Right One In with the correct original theatrical subtitles! I guess I should have expected this from those crazy cats. They were also the only ones to broadcast the original cut of Grindhouse, after Dimension decided to split the DVD release into two separate parts. All I have to say is well done TMN. Well done.

There's A New Slasher In Town.

My friend Serena just got back from a stint in Lousiana, where she was trudging around a swamp working on a short film she wrote earlier this year. Based On Actual Events is about a guy who wakes up in a swamp with a bunch of strangers. He has no idea where he is, yet at the same time everything seems somehow 'familiar'. Having read the script, I can say it's a great idea and I'm really looking forward to seeing how it all turns out. Below, is the first promo image that Serena tweeted this weekend. 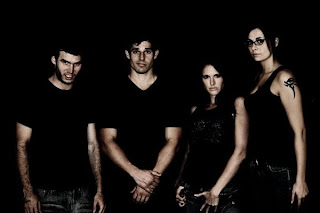