It’s been a whirlwind last couple of days at Toronto After Dark. The highlight was getting to see The Children with an audience. The crowd ate it up, although they seemed to get off on the child-killing maybe a little too much...

Moving onto Thursday, this would be the part where I’d review an Indonesian film called The Forbidden Door. However, I don’t feel right doing that considering the unfortunate circumstances we all had to endure while viewing it. We had a crazy storm hit Ontario yesterday, that even included some tornados touching down (which NEVER happens) and the Bloor’s projector being fried early on in the show. This meant that rather than cancel the screening – like when the power went out at the My Bloody Valentine screening in January – we watched it off a DVD. This would have been fine except the player kept shutting off every thirty minutes or so. And we never did see the after-credits finale, which I’m told is kind of important. Oh, did I mention the air conditioning was on the same breaker as the blown projector? So, you see where I’m coming from. I have to hand it to the staff and volunteers working After Dark though, they really know how to handle a sticky situation.

I also got to see Trick ‘r Treat again. That was a crazy screening, with many people having to be turned away. It’s amazing just how much horror fans want to see this film. And yet it will have no theatrical release. Director Michael Dougherty was in attendance and here’s what he had to say when someone asked him about why it’s been shelved for so long. He basically said it’s up to us. If we don't support original horror, Hollywood is just going to keep pumping out the same old repackaged crap. The first thing the suits ask when you are pitching something is, “what’s it based on?” 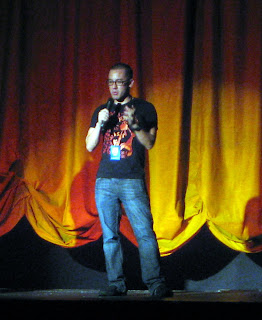 I have to agree with him. If the bean counters see that Saw V makes in one weekend what Drag Me To Hell makes in its entirety, which projects do you think they are going to green light? It’s our own fault. Do we so-called rabid and loyal horror fans want The Children, or The Children Of The Corn remake?

Probably just as enjoyable as the films for me have been the pub nights afterwards and getting to hang with my cinephile associates. I’m not going to lie to you, I’m suffering from severe sleep deprivation, but I wouldn’t have it any other way. 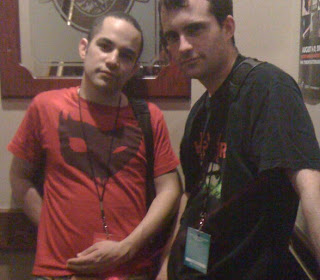 Mitchell told us to channel Lee Marvin and Clint Eastwood. This is the best Darryl & I could do at three in the morning.

So, after all that, I came home to a wet mattress because my roof is leaking again. That means I got even less sleep last night. Argh! There’s just one more night, then dreamland and I can once again become reacquainted.
Posted by Jay Clarke at 3:02 PM