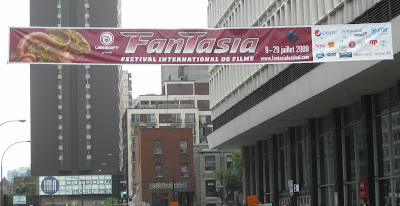 Last week I had a glorious time in Montreal. It was probably one of the most relaxing holidays I've ever had. You know how sometimes when you go away, you run around trying to pack in as much stuff as possible, so when you get back you're exhausted and feel you almost need a vacation after your vacation. This was NOT the case with my trip to Montreal. Even the six hour drives back and forth were pretty painless. When you are in the company of friends – my same companions from last year, Serena Whitney and DirtyRobot – it can make time go by pretty quickly. Especially when it's spent reading trivia cards from an old horror game I dug out my crawlspace. 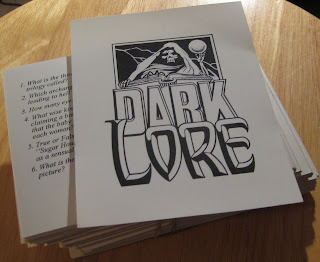 In addition to the half-dozen or so horror films I took in at Fantasia, I also caught a really entertaining Korean genre-bending period piece called Private Eye and a Thai martial arts flick called Fireball. I remember saying I was disappointed that I'd seen a lot of the movies that were playing Fantasia that week. Well, that didn't stop me from seeing them again. Since Serena was a Troll 2 virgin, DirtyRobot and I not only went to the midnight screening of it (the Montreal audience was absolutely RABID and way more lively than Toronto's), but also caught the doc Best Worst Movie again, as well. I'm also very glad that my high opinion of I Sell The Dead did not change after a second viewing. 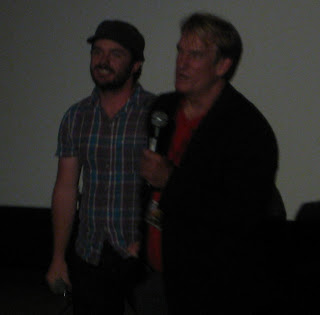 The days went like so. We'd get up at a respectable hour and hit the metro into town. We tried to hit one landmark eatery – like Schwartz's or Woodlands Pizza – a day. Then we'd hit a patio downtown until it was time for our flicks. We branched off once and a while (I saw Fireball solo, DirtyRobot saw the Japanese superhero flick K-20 by himself, and Serena caught a movie called Neighbor, while we opted for 500 Days Of Summer at the local AMC instead), but for the most part we stayed together. Once our movies were done, it was back to the Irish Embassy patio and then home. 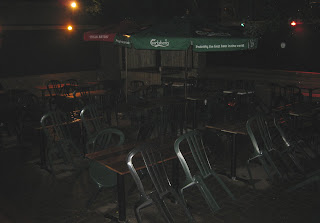 However, the nights did not end there. Whatever alcohol we'd acquired in the day (they sell booze in convenience stores here, so civilized!) was consumed by way of a drinking game we made up using dice. Then, around three of four, we hit the hay. Rinse and repeat. What a life! Probably the only downer was that it rained a lot while we were there, but really the only thing it affected was whether we drank inside or outside. We only got caught in it once. On the drive back, we had an extra passenger. The print for Embodiment Of Evil came with us, so that was kind of cool. 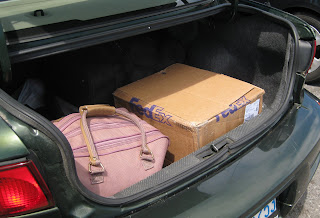 Special delivery for Toronto After Dark!

After I dropped everyone off at their respective abodes, what seemed like the most appropriate thing to do after driving home six hours from a film festival? Why, see another movie, of course! You see, I had this free pass for Jennifer Lynch's new film Surveillance and it expired that day. I couldn't let it go to waste, could I? I may review it later if I find the inspiration.

So, that's my Montreal trip in a nutshell. There were lots of movies, tons of drinking on patios and many delicious eats. And the only thing that got a workout was my liver. Stay tuned this week for all my Fantasia reviews, as well as one for Orphan which I caught at the AMC while I was there.
Posted by Jay Clarke at 12:00 PM