I've got a few thoughts rattling around the old noggin about two recent releases - Jennifer Chambers Lynch’s Surveillance and David Twohy’s A Perfect Getaway – so I figured I’d just throw them together in one post. First up is Surveillance. 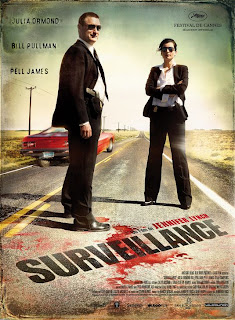 The details of a deadly altercation on a desert highway are told to a pair of FBI agents (Bill Pullman & Julia Ormond) through the testimony of three separate witnesses.

Every once and a while, I have a hard time gauging how much I like a film. It usually happens when I’m watching one and find myself, for whatever reason, about fourty-five minutes ahead of the characters in it. I remember also stuggling with this issue during my experience with Bill Paxton’s 2001 film Frailty. Everything else about the production is great, but you have that nagging twinge about being cheated out of the finale because the filmmakers didn’t play their cards close enough to their chest. Aside from that though, Surveillance is a pretty good flick.

The first act is very reminiscent of the work of her father, right down to the mannerisms of eccentric FBI agent Sam Hallaway (Pullman). After the setup though, Chambers Lynch strikes out on her own. In some odd/inspired casting, Michael Ironside, Hugh Dillon, French Stewart and former SNL alumni Cheri Oteri show up in supporting roles. And last, but certainly not least, Julia Ormond puts in a strong performance as Hallaway’s partner Liz Anderson. A thing that struck me after watching the film was why it was called Surveillance. At first, it seems appropriate, but that whole angle is all but abandoned halfway through the film. Like I said before, Surveillance’s only downfall is its inherent obviousness. Regardless, it is safe to say Jennifer Lynch has fully rebounded from Boxing Helena, a film which seemingly kept her out of action until now.

Now, onto A Perfect Getaway, a screening I fell into by chance. I went to the theatre to see the documentary The Cove, but they oversold it, so they offered me tickets to Getaway instead. Being that I generally see ANYTHING with Milla Jovovich in it anyway, this was not a tough sell. 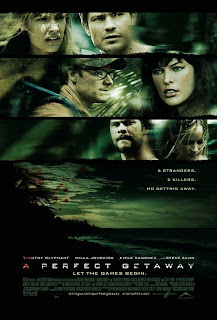 Cliff & Cydney (Steve Zahn & Milla Jovovich) are honeymooning in Hawaii, when they hook up with fellow trail-walkers Nick & Gina (Timothy Olyphant & Kiele Sanchez). As they get further and further into the bush, Nick & Gina’s behaviour gets a little odd. What’s worse is there is news of a serial-killing couple on the loose nearby.

I wasn’t aware that it was directed by David Twohy (Pitch Black, Below) until the opening credits, so that was a nice surprise. What makes the movie work for the most part is the great cast, the best of which is Olyphant (or 'Olyphantastic' as Kevin Smith once referred to him in one of his An Evening With performances). He really takes the role that was handed to him and runs with it. There is a great deal of self referential dialogue which I can usually take or leave, but the delivery sells it for the most part. Another important point I must make is how brilliantly the Hawaiian islands are showcased in this movie. It's going to make for a gorgeous Blu-Ray. I have to say though that A Perfect Getaway was somewhat of a frustrating experience because I feel that to get to its conclusion, Twohy engages in some dishonest misdirection.

As far as survival thrillers go, this is a good effort, but I still can’t help feeling that it comes off the rails at the end though, as some of the setup just doesn’t gel with its payoff.
Posted by Jay Clarke at 10:08 AM