Killing Me With Candy

So, we were all excited to see Crawler... okay well, at least DirtyRobot and I were. Then this short comes on beforehand. I use the term 'short' loosely, because it was fourty-five minutes long, and probably the worst piece of shite I've ever had the displeasure to sit through. I know it was a hometown short and I understand supporting your peeps, but this was friggin' ridiculous. The only place this short should have seen was the inside of an incinerator. I try not to be too harsh because I know how much work goes into a production of any size, but the end product should not make you want to gouge out your eyes with a spork. Bonbons Rouges (Red Candy) is an embarrassing display of fanboyism and I'm convinced the editor and script supervisor must have at some point been bound, gagged and thrown in the Saint Lawrence River.

You know those horror films that have references to other horror films to let the audience know that the filmmakers are film geeks too? Well, Bonbons does that. A lot! I mean A LOT! It makes The Dead Hate The Living look subtle. In fact, I would implore you to find a ten-second bit of the movie that doesn't show a magazine, a DVD, a poster, an action figure or culled piece of dialogue. Man, it's ugly. It's not clever and all it really does is pad the running time and annoy the viewer. I mean, there's a scene in a video store that begins with two dudes dressed as Darth Vader & Boba Fett beating on another dude dressed as Jar Jar. It's worth maybe a chuckle, but what the hell does it have to do with the story? I collaborated on a script with a friend of mine who likes to be liberal with pop culture references and the first thing I did was tone that aspect of it down. After seeing Bonbons, I know that was a smart decision.

And Bonbons' length just made the experience worse. It was exhausting. Now, think of us poor souls who were there at midnight for a bad (albeit entertainingly bad) movie. We'd just had our cocks kicked by this short and knew we still had an entire movie coming up. And they even put ANOTHER SHORT ON! Were they conducting some kind of government behavioural experiment that night? 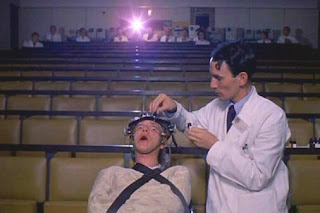 All this negative talk is counter productive I know as you now may be thinking 'I kinda want to see this now to see how bad it is'. I would likely think the same thing. Now slap yourself in the face! DON'T DO IT!

Okay, I've spent waaaay too much time on that. Let's get onto the reason we were actually there. 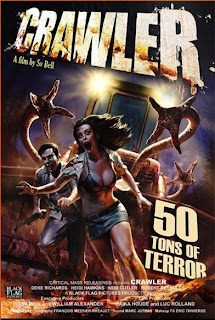 Well, what can I say? It is what it is. It took me a full fifteen minutes to shake off the previous short, but Crawler did give me a few belly laughs. It's a movie about a killer bulldozer, what do you want? It is just the right amount of ridiculousness, awkwardness and awesomeness to make it fun. But then again, anything after Bonbons Rouge would seem like Citizen Kane. I'd re-watch it though... with a lot of booze and a group of individuals who were into that sort of thing. Oh, and get this. There is a devastating epilogue to this story. We found out later that someone screwed up and Bonbons was supposed to have played AFTER Crawler. What a soul-flaying debacle!
Posted by Jay Clarke at 8:01 AM