Okay, it's been a while since I've done one of these, so let's get right into it, shall we?
Blu-ray Moon.

One of the greats is getting the Blu-ray treatment next month. On September 15, John Landis' horror comedy staple An American Werewolf In London hits the Hi-Def shelf. But wait, there's more. Not only do you get all the great content from the already comprehensive 2004 DVD release, but you also get two more documentaries. The first is with legendary make-up man Rick Baker reminiscing about his love of the fictional lycanthrope and the second is Paul Davis' AWIL doc Beware The Moon that has been touring the festivals of late. With the previously announced release of Richard Stanley's Hardware, September looks like its gonna be a stellar month for genre home video.

Resurrected Ricci.
During the week, DirtyRobot likes to play 'Let's give Jay a coronary at his desk', by sending me random links over FB chat. Like this one for instance. 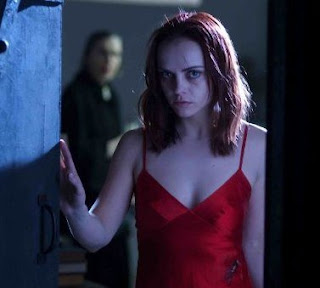 It's a newly released pic of Christina Ricci looking all hot and undead from her upcoming flick After.Life. In it, she plays a girl who is held captive by mad scientist Liam Neeson. It sounds like Deadgirl, except without all the tastelessness. Click here for the rest of the pictures, courtesy of io9.
The Night Of The Living Medium.

The Inevitable Zombie Apocalypse posted an interesting piece of news last week. Apparently, Patricia Arquette's long running television show Medium is doing a Halloween episode where Arquette's character is going to be inserted into the horror classic The Night Of The Living Dead. I don't know how that's going to work, but I'm intrigued. I've never watched an episode of the show, but I'll certainly check this one out. Click here for the original post on IZA.

There have been a shit-ton of trailers popping up over the last week or so. I'll leave you with this trio.

I've always been a fan of Ricci. No matter which genre she chooses to be in, she has always been a great actress. I don't think she has been in a great horror film yet though. Maybe that will change with this new one coming up.