Despite the four hours of sleep the night before, I had to soldier on because one of my most anticipated films of Toronto After Dark was on Monday’s eve. This was, of course Yoshihiro Nishimura’s newest effort Vampire Girl vs. Frankenstein Girl. Preceding the movie, I also got to see friends of mine; Chris Nash and Ioana Vasile present their new short Blackheads. Anyone who has seen their previous work (Day Of John and Please Stand By) knows how delightfully bizarre they can be. All right, let’s get into the red stuff. 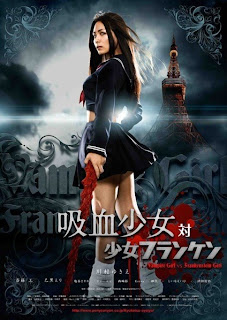 Japanese high schoolers Monami (Yukie Kawamura) and Keiko (Eri Otoguru) are battling for the affections of classmate Jyongo (Takumi Saito). The power struggle turns bloody when Monami reveals herself as a vampire and Keiko ends up dead. After Keiko’s mad scientist father reanimates her, she comes back looking for revenge.

Ah, Nishimura. His stuff never ceases to put a smile on my face. I eat this shit up like ice cream. Vampire Girl vs. Frankenstein Girl is quite a bit different than its predecessor Tokyo Gore Police. I guess it’s what you would call a romantic comedy if you can believe it, only with lovely Japanese women brandishing sharp implements, body mutilation and immeasurable amounts of blood and guts. You know, the general insanity we’ve come to expect from the land of the rising sun. This one had considerably more CG in it than TGP, but almost every scene featured some degree of practical effects, so I hardly minded. I’d say that overall, VG vs. FG is probably my least favourite of the three recent offerings of this ilk – TGP and Machine Girl being the other two – but there are some ways in which it is superior, as well. The pace is much slicker than TGP’s, but that is most likely due to VG vs. FG’s running time being almost a half hour shorter. One of my favourite bits is when super cute Yukie Kawamura gleefully revels in geysers of arterial spray for over a minute. While some were probably thinking that scene needed an editor, I was mulling over how I could make it my desktop screensaver. 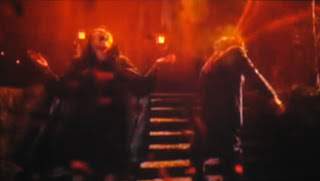 I had assumed the scenes with the two after school clubs – the wrist cutters and the ganguros – were just random vignettes, something which Nishimura is not beyond doing, but they were actually worked into the main story later on. Speaking of the after school clubs, I guess I should say something about some people’s cries of inexcusable racism. Fortunately, After Dark programmer Todd Brown was at the screening with a clarifying message from Nishimura himself. The exaggerated black stereotypes in the movie are not directed at African Americans, but rather at Japanese school children that like to dress and artificially tan themselves to look more like them – an inexplicable trend in Japan right now. Todd also passed on something else from the director. Apparently, Japanese film distributors care little about markets outside their shores, but Nishimura made it clear in his contract that this film HAD to play at four selected film festivals in North America (TAD, Fantasia, NYAFF & Fantastic Fest) because he is aware of his rabid fan base over here. 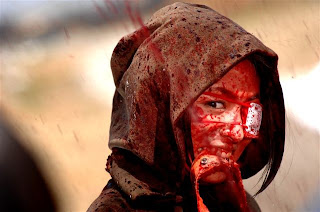 I can understand how this stuff isn’t most people’s cup of tea, but I can’t get enough of it. After the movie, I had a conversation with my buddy Darryl, which pretty well sums things up.

-“We know killer Japanese schoolgirls are your Kryptonite.”
-“Kryptonite? If that were the case, wouldn’t it take AWAY my powers? Melt me or something? If anything it’s the opposite. It’s more like catnip.”

Bring on Robogeisha!
Posted by Jay Clarke at 3:15 PM