A movie that's been on my radar for quite some time now is the Norwegian zombie romp Dead Snow and I finally got to see it at Fantasia. Here's what I thought. 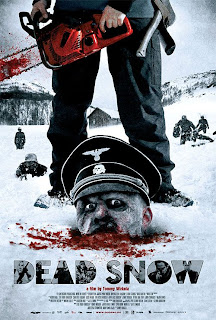 A group of skiers enjoying a relaxing weekend at a friend's cabin run into a regiment of reanimated Nazi soldiers looking for their lost treasure. Hilarious chaos ensues.

Dead Snow is quite a lot of fun. It is equal parts silly and clever. It, like many of its contemporaries recalls the genre films of Raimi and Jackson – and even Neil Marshall's The Descent – but often puts a spin on the proceedings to make it their own. Director Tommy Wirkola and his crew often get really creative with the gags and it makes for some great moments. And I don't think I've seen a sex scene in an outhouse before, so that was a first. 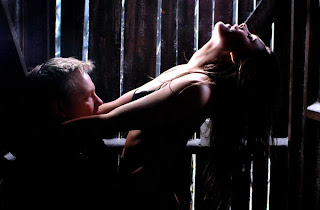 There are some really good laughs in Dead Snow, a lot of them coming from the undead themselves, who show great comic timing. It was just so great to see Nazi zombies do more than just rise out of the surf. The gore and zombie effects were all top notch. There was a bit more digital blood than I would have liked, but it was a mild distraction. The crowd I saw it with seemed to eat it up. Actually, there were a pair of girls next to me that acted like they'd never seen a horror film before. I kind of envy that sensitivity.

Dead Snow is pretty much what I was expecting, a good time with lots of gore and laughs. It may be simple, but that's why they call it bread and butter. Dead Snow is a worthy edition to the list of post-Shaun zombie comedies.
Posted by Jay Clarke at 8:00 AM