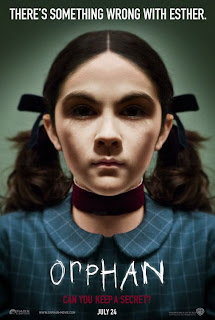 After Kate Coleman (Vera Farmiga) miscarries her third child, she and her husband John (Peter Sarsgaard) decide to adopt. While at an orphanage, they meet Esther, a gifted nine-year-old girl who seems like a perfect fit for their family. Soon after though, Kate starts to wonder if there isn't something off about Esther.

First off, I'd like to say that the selling point of this movie is not the twist that you've been hearing about, but the performance put in by young Isabelle Fuhrman as the title character. I don't know where they found this kid, but she does a phenomenal job. I looked up her age, positive that she must be a lot older than she looks, but no, she was ten when she shot it. That is astonishing to me. You just don't get a performance like that out of a child, and with a Russian accent no less. How long did they have to search for an actress that could pull off the character of Esther so seamlessly? All the cast is great in this really. Farmiga (basically reprising her role from 2007's Joshua) and Sarsgaard are solid as the clueless parents. Farmiga plays it beautifully in some of the exchanges she has with Fuhrman. She just doesn't know how to react to some of the things that come out of Esther's mouth. The two siblings (Jimmy Bennett & Aryana Engineer) put in fine performances, as well. 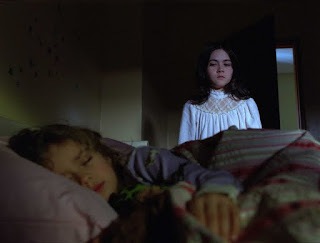 Before the shit hits the fan, there is a skillful level of subtlety to Orphan. There are plot points that are mentioned, but not detailed. It adds a sense of depth and reality to a piece that could have been formulaic. That's not to say we haven't seen this story before, but the presentation and performances are such that it seems fresh. The film is also shot really well, with some great sequences to look at. Director Jaume Collet-Serra has again taken a tired formula and made it his own. In 2005, he took the House Of Wax remake and made it an entertaining string of impressive set pieces. The twist in Orphan that everyone had been talking about was not nearly as outrageous as I was expecting it to be either. I was like, 'well, that just happened, okay, moving on'. The sole reason it worked for me is that Fuhrman sold it so completely. 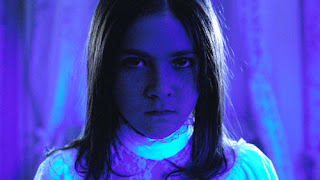 The last ten minutes or so is pretty standard fare unfortunately. I'm also confused as to why they felt the need to steal from a far inferior film like Ring 2. And sadly, Orphan is another film that was hurt by its terrible trailer. It was luckily able to capitalize somewhat on word-of-mouth, otherwise it could have been ugly. It seems Dark Castle Entertainment is making a comeback. After long being considered a crap factory, it has rebounded here with Orphan and hopefully the upcoming Kate Beckinsale vehicle Whiteout will impress, as well.

For final thoughts, again I have to go back to Isabelle Fuhrman. She really made an impression on me. Skip the trailer and just check this one out.
Posted by Jay Clarke at 12:45 PM

Glad you liked this one so well. I agree with you that the trailer ended up giving too much away. Not sure why they do things like that. Hope you never do!