A lesser known title I took in this Fantasia was the world premiere of Aussie Joseph Sims-Dennett's Observance. 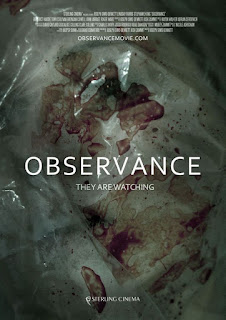 A destitute man named Parker (Lindsay Farris) takes a job spying on a woman. After several days cooped up in the ratty apartment across from her, the mystery behind his assignment incites a crippling paranoia.

Observance was a strange film that took a while for me to digest. It's one of those films that if, taken at face value, seemed to be straightforward, but upon further reflection you wonder if there wasn't more going on under the surface. The premise does have the Hitchcockian underpinnings of Rear Window, but Sims-Dennett's allegiances lie more with Roman Polanski. His 1976 film The Tenant was mentioned in the intro and Observance definitely shared a similar descent into madness.

The film's most powerful aspect was its underlying sense of dread. It was helped along by the score and set design, but Sims-Dennett just had a knack for portraying even the most mundane moments as threatening. This is a very important skill as when you're dealing with low-key psychological horror, successfully making it appear that more is going on than what you are seeing onscreen is a rare talent. It is also laid out in such a way to make you feel like you are right there trapped in that apartment with the protagonist.

Observance also has a very cool look. It reminded me a lot of Marc Evans' underseen (and decidedly mediocre) 2004 flick Trauma. It had the same decrepit apartment block facade that served the film aesthetically and metaphorically.


It is always hard to say where a meditative genre piece like Observance will end up once it is finished its festival run, but if it does pop up somewhere in the future and you like this sort of thing, give it a watch.
Posted by Jay Clarke at 12:00 PM