After getting myself settled into my downtown Montreal abode, my Fantasia experience began with Jonathan Milott & Cary Murnion's horror comedy Cooties. 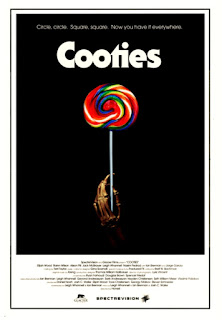 After an elementary school's student population become infected by a mysterious virus that turns them into feral cannibals, the teachers find themselves in a struggle for survival.

After its premiere at Sundance last year, Cooties seemed to disappear for a while, so I was glad to see it play here before it releases wide (and by wide, I mean the US and likely not Canada) in September.

Before I get to Cooties though, I'd like to mention the fantastic little short that played before it called Point of View. Made by fellow Torontoian Justin Harding – whom I was surprised none of my crew were even aware of, our film community is small, but obviously not as small as we thought – this short is basically everything you could want in a horror short film. While liberally borrowing from the premise of Doctor Who baddies The Weeping Angels (saying so in the credits makes it ok, right?), this piece had excellent pace, performances and makeup effects which made it a huge crowd pleaser.

Anyhoo, Cooties was a fun time. After an opening credit sequence that'll make you never want to eat chicken nuggets again, the film wastes very little time getting to the carnage. Though there are several good set pieces revolving around dispatching infected foes, I think the real strength is the ensemble assembled for this. They mesh together well and keep the movie from falling apart when the novelty of the byline wears off about an hour in. While the focus is on Elijah Wood & Rainn Wilson, who both do what they do very well, I thought that Leigh Whanell was the real scene stealer here. He had the majority of the best one-liners (perhaps because he co-wrote the screenplay) and his comedic timing was really on point.

After recently re-watching The Faculty, it was funny to see this, as it is pretty much the reverse scenario, with the teachers being the besieged by the students. As the trailer would suggest, there is a lot of child murder in this movie. Granted, it is comedic and the antagonists are ferocious beasts, but they get mowed down in droves. It was interesting to see the reactions, which ranged from overly enthusiastic – seriously, after screenings of 2008's The Children and this, it seems like some people have a real blood lust for this stuff – to downright disturbed.


Cooties is one of those movies where the trailer gives you an exact representation of what to expect. If you dig the trailer, you'll dig the movie.
Posted by Jay Clarke at 10:00 AM