All Hail The Blind God!

A movie I'd been hearing about since its premiere at SXSW was New Zealand's Jason Lei Howden's horror comedy Deathgasm. 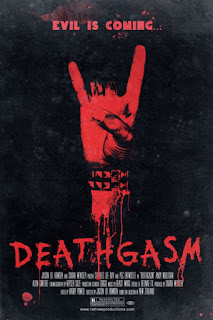 A group of teenage metalheads unwittingly resurrect an ancient evil that casts their sleepy town into chaos.

Deathgasm was bloody buckets of fun. The Kiwis have always had a real affinity for mixing comedy and horror, as aside from the obvious Peter Jackson classics that this film playfully pays homage to, there have also been crazy cats like The Spierig Brothers (Undead) and Jonathan King (Black Sheep). However, I would say the biggest influence on this movie was Sam Raimi's Evil Dead though. It was really hard not to enjoy myself when very Candarian-like demons started popping up everywhere.

The movie was also incredibly gory. I should've expected that considering the source, but I guess it's just been a while since it's been done properly like this. Although, I do feel that Howden may have a borderline unhealthy fixation with crotch-area mutilation. He seems to get a little too much enjoyment out of stuffing sharp objects up people's anuses.

I feel like this was kind of what I wanted from 2008's Dance of the Dead, but it never quite hit the mark like Deathgasm did. I've never been into metal – unless you count my brief sampling of Twisted Sister and Motley Crue circa 1985 – but I feel the outcast teen is pretty relatable no matter where their interests lie. I don't have much more to say other than Deathgasm is definitely the kind of movie best seen as a shared experience with an audience.
Posted by Jay Clarke at 12:00 PM