Hey all. I've torn myself away from the Friday the 13th Game long enough to bring you today's post. Actually, I could probably do this while I wait to get into a match lobby (I keeed) but more on that later. For now, here's what I've got.


I liked the original 2014 movie well enough. I think my only real qualm was that they opened the film introducing this really bad-ass heroine (Bianca Bradey, the gal who shows up at the end of the above video) and then she was chained to a wall for most of the movie -- coincidentally like Nandalie Killick does here. I was definitely won over by the end though.

What Are You Afraid Of?


AMC's horror streaming service Shudder is launching its original programming slate with a documentary/horror narrative hybrid called Primal Screen. Directed by Rodney Ascher (Room 237), Primal Screen explores why we are both attracted and repelled by what scares us most.


I'm into this. Primal Screen feels like an extension of Ascher's last doc The Nightmare, but I'm also getting Channel Zero vibe from it, as well. Primal Screen premieres this Thursday on Shudder.


My friend Trevor directed me to this cool little art generator this weekend. Just go to http://fotogenerator.npocloud.nl, make a little doodle and this handy doodad will turn it into nightmare fuel right before your very eyes. Case in point... 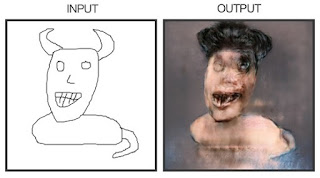 Go ahead and try it. Fun for the whole family!
Posted by Jay Clarke at 8:00 AM

I've held back on buying a copy of the Friday the 13th game for now. Out in Steam world the 1000+ reviews register this as mixed. From reading some of these reviews the negatives ones re-iterate similar points:

1. The price, $40 bucks is high for current amount of content.
2. Lack of content, and early release/alpha stage.
3. Jason is too over-powered. A balanced game would allow for either the victims or Jason to win about 50/50 of the time, but as the game is currently designed, it's too hard to survive as one of the campers.

What's your opinion? Is the game more balanced than the detractors would suggest? I know that Steam holds two big sales a year, and one is coming up for Summer. I'm thinking of holding off until this put out on special for $20 bucks.

Hey Belial.
I’ll leave the deets for my review, but in short.
1)I don’t think $40 is unreasonable considering AAA titles go for $80.
2)The content is fine, the issue is this came from a small company and they underestimated the response, so their servers have been overwhelmed. It can take up to 20 mins to get in, and the crash/glitch rate is at about 20%, so that would be the reason to wait.
3)As for Jason, are they joking? These people have seen the movies, right? It’s supposed to be hard. Besides, it all depends on the players. If you’ve got a Jason who knows what he’s doing it can be challenging, but if you’ve got a group of counsellors who work together (don't run around separately like the idiots in the movies) then you can fix the car or call the cops and escape within minutes.