The last thing I checked out at Hot Docs was Rodney Ascher's new documentary The Nightmare. 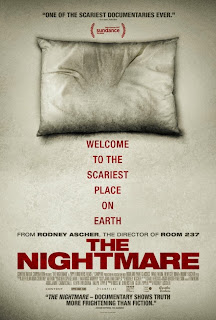 Rodney Ascher interviews sufferers of sleep paralysis about their experiences.

Though the assertion that this is the scariest documentary of all time is a bit of an overstep, there's certainly some creepy imagery within. The very idea of sleep paralysis is a horrifying one and the more solid re-enactments of the bunch do succeed in getting that across. The bit with the cat was pretty unsettling and the sudden violence of the one with the claw machine took me by surprise, as well.

As you can guess by now, the re-enactments are the meat of the doc and, by far, its best asset. That being said, I have to wonder why Ascher didn't focus his attention more on those. In his previous documentary, Room 237, we never saw the subjects at all and that kept us rooted in the dream-like world of The Shining. Here, Ascher shoots back and forth between the eight interviewees, as well as shifting between us watching them tell their nightmares, and the accompanying dramatizations. It messes with the atmosphere that Ascher was no doubt trying to build. However, it also depends on the stories themselves, as they range from downright chilling to somewhat silly.


I also felt that The Nightmare was a little light on the science.. I'm sure that there must have been some studies done on sleep paralysis, but we don't get any further than, “the doctors couldn't do anything for me.” If the American health system is really that flawed... well then, my condolences. In the absence of science, Ascher goes just short of suggesting a supernatural angle, in that he spends time listing all the mythical creatures around the globe that were believed to attack people in their sleep. One of his interviewees goes so far as to say that invoking Jesus' name cured her of her affliction. Hey, whatever lets you sleep at night, I guess.

I think for me, the scariest thing about The Nightmare was the insinuation that sleep paralysis can be contagious. On a few occasions the doc talks of people being told about sleep paralysis and then experiencing it themselves. This was obviously psychosomatic, but that doesn't change the fact that it could happen. I think everybody in the theatre took that connotation with them afterward. I know I may have watched a couple of extra episodes of junk on Netflix to delay hitting the sack that night.


The Nightmare may stumble in its execution, but it's still worth a watch, as it covers a fascinating topic and does offer up some genuinely unnerving moments. Until next time... Sweet dreams!
Posted by Jay Clarke at 10:00 AM