Oh my God, what is going on around here? There was a fucking FROST warning on Friday night!!! Can you believe this shit? Other than that though, it's been a pretty interesting weekend of people-watching followed by trashing an old house for a music video, so I can't complain too much. As for news, here's what I've got for you.


Last year, I posted about a great little book called Kid Power!, a collection of articles about past cult kids movies & television from all around the world put out by Spectacular Optical. Now, Toronto-based cinephiles Kier-La Janisse & Paul Corupe are gearing up to release their new venture, Satanic Panic: Pop Culture Paranoia in the 80's. 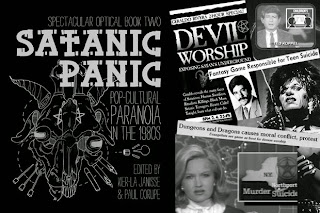 For those of us who grew up in the eighties, you'll remember how some religious groups rebelled against horror films and role-playing games. Or basically anything cool really? This nonsense even leaked into mainstream press, back when religion seemed to have more of a hold on such things.


Anyway, to cover the printing costs and design fees, the publishers have for our help via an IndieGogo page. For a measly twenty dollars (plus S&H) you can own your very own copy when it releases this summer. 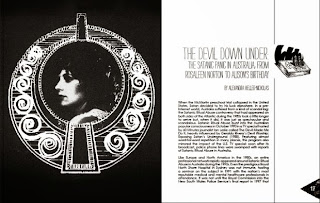 Though the book delves into many facets of pop culture, some of the exciting film related articles include a look at heavy metal and devil worship in cult cinema (by Samm Deighan), home video and the proliferation of satanic panic (by Wm. Conley) and a look at paranoia as cosmic catharsis via 1989's The Burbs (by Kurt Halfyard).

To contribute to the campaign, go here.

The Art of It Follows.


One thing that I've been really impressed with subsequent to the release of It Follows is all the fan art it has inspired. And it is not going unnoticed. For the UK home video release, the distributor Icon decided to have a vote to determine which fan contributed art would be printed on the reverse sleeve of the release. Here were the finalists;


Of course I'm partial to my buddy Trevor's, but I can't deny that Beckett's is pretty fuckin' crackin. It Follows releases in the UK on Blu-ray on June 29th and the domestic release is set for July 14th.


Here are a couple of trailers that popped up this week. First is the teaser for Jessica Cameron's lesbian love story Mania.


Blood, lesbians and Tristan Risk. An easy sell if you ask me. The second is for Jonathan Milott & Cary Murnion's Cooties.


I'm glad to see this has resurfaced, as it seemed to all but disappear after its premiere at last year's Sundance Film Festival (yes that 2014, not 2015). Perhaps the whole 'it's ok to kill kids if they're zombies' loophole wasn't initially airtight enough for Lionsgate to put it out. Even the actual release in September seems a little tentative, but hopefully TWC's decision to spring for some theatres instead of just dumping It Follows onto VOD has started a trend.
Posted by Jay Clarke at 1:44 PM