Thanks to my buddy Trevor, I came across a wicked indie game developer named Pig Farmer Games on the weekend. Well, technically it's just one guy named Ben Cocuzza, which makes his output nothing short of extraordinary. I may be late to the party on this one, but hey, better late... 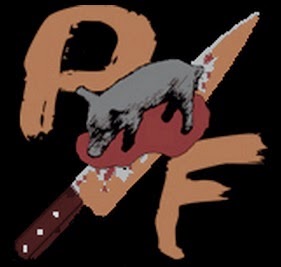 
I came across this when Trevor mentioned he was playing the demo for his newest game Power Drill Massacre. When I looked him up, I noticed that he'd also made a game earlier called Babysitter Bloodbath. 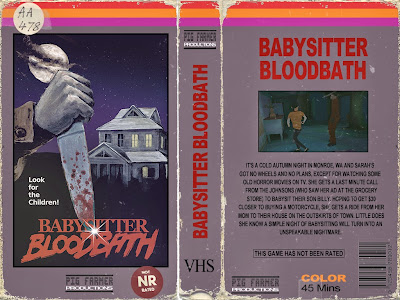 A few years back, he'd originally made a direct gaming homage to Halloween, but for obvious reasons had to later modify things to keep the lawyers at bay. So in December 2013, Babysitter Bloodbath was released. You know, it's really surprising to me that all that went on without me hearing about it. Especially since that was right around the time I was touring Lively around.


Regardless, I downloaded Babysitter Bloodbath (it's free!) on the weekend and gave it a whirl. It's an absolute blast. It totally looks, feels and - somewhat unfortunately - controls just like a game from the Playstation One era. And considering that it's just one dude coding out of his house, it is actually quite robust. The difficulty level was challenging at times, again mainly due to the clunky controls, but that also brought with it memories of bumbling away from the baddies in Resident Evil way back when.


I love the added touches, as well. All the slasher tropes are present and the synth score is an added bonus. You can also play in VHS mode, which gives everything that faded look complete with tracking lines. Cocuzza even put Night of the Living Dead on the TV!


I highly recommend it. It will get your pulse racing and takes no more than an hour or two to finish, so it isn't a huge time commitment either. I'm so glad I found this guy!


I gave Power Drill Massacre - under his new banner Puppet Combo - a try, but found it a little buggy. It is a work in progress after all. It showed tremendous potential though and I'll definitely come back to it when all the kinks have been worked out.