Hey everyone! To all my Canadian friends, I hope are enjoying your May 24 weekend. To the rest of you, I hope your Sunday is a relaxing one. Here's some horror morsels to get you going.

This week, some of the titles bring pitched at this year's Frontières in Fantasia were announced. The complete line-up will be revealed at the end of May, but this preview certainly is promising.

Based on his positive experience at Fantasia in 2014 with The Harvest, director John McNaughton returns to Montreal to pitch his new project, Carny Kill.

After knocking audiences on their asses in 2010 (Jesus, has it really been five years?) with his debut A Serbian Film, unapologetic button-presser Srdjan Spasojevic returns with his follow-up, Whereout.

Homegrown filmmaker Renaud Gauthier hopes to continue the success he had with 2013's Discopath with this sophomore effort, 'Lude Behavior.

That's a good start, wouldn't you say? I'm actually staying a while longer in Montreal this July, so I might get to see a few of these presentations if all goes well.

Here's the new teaser for the upcoming MTV show, Scream.

There's also the fact that the slasher formula doesn't really lend itself to a television serial format. And the “Randy” character pointing that out in the trailer doesn't negate that. If you're going to do a slasher as a show, you need to be more upfront about it, like 2009's Harper's Island, where they told you at least one person would die an episode ala Ten Little Indians and it was a closed thirteen episode event. Who knows how long Scream could drag on for? And then there's Scream Queens...


Ryan Murphy has had success in the past with his genre trope melting pot American Horror Story, so I'd say this one does seem a little more promising. Though I'd be a little more excited if it was on FX, and not Fox though.

Grey Matter Art recently commissioned artist Gary Pullin to create a new poster for Evil Dead II. Naturally, it turned out groovy. Check it out - along with the glow-in-the-dark variant - below. 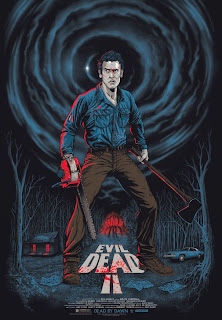 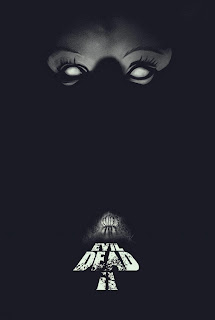 These are terrific and Gary got the likeness just right too. They went on sale last Thursday and are only limited to 150, so go here if you want to grab one for fifty bones.
Posted by Jay Clarke at 12:00 PM