I guess watching so much snuff-centric cinema lately was my way of unconsciously preparing for Thursday’s screening of A Serbian Film at The Bloor Cinema. 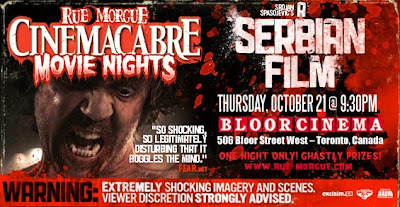 Before the screening, I asked my buddy Mitchell – who’d seen it back in April at SXSW – what he thought the over/under would be on walkouts and he replied,

Well, everything you’ve heard about A Serbian Film is true. It is merciless, relentless and uncompromising. Whereas the shocking films of recent years (like the French new wave titles Inside & Martyrs and gross-out flick The Human Centipede) always had a layer of entertainment mixed in, A Serbian Film has no time for any of that. This is dead fucking serious shit. Director Srdjan Spasojevic does not come from a nice place and with all the subtlety of a sledgehammer to the face; he wants you to know it. 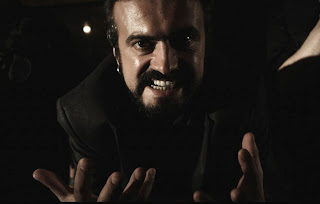 This is not an enjoyable film to watch, yet it is so well made that it cannot be dismissed as just another empty shock film. I could not, save maybe its overt repugnance, find a single flaw in A Serbian Film. The two leads, Srdjan Todorovic & Sergej Trifunovic give harrowing performances and fully commit to their roles. They are very well known actors in their native lands, so this is a brave choice for both of them. It would be like if Kevin Bacon & Brad Pitt decided to a star in a film that smashed all boundaries of sex and violence. I can only imagine the uproar. Furthermore, the film itself looks amazing. The set design and cinematography are top notch and the gore rivals anything served up by the best in the business. And on top of all that, perhaps the biggest surprise was the fantastic score. I would totally buy the soundtrack, if not for the visual associations that would resurface every time I put it on. 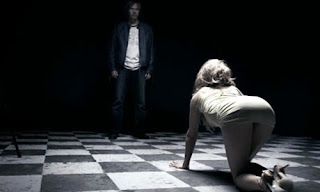 I’ve talked before about the stuff that really gets under my skin, so thankfully I managed to get through it relatively unscathed. I wilfully subjected myself to A Serbian Film, but you’d have to strap me down to watch Winterbottom’s The Killer Inside Me. No matter how thick your armour though, the sheer volume of ugliness will eventually overwhelm you. Once it gets to the infamous scene that everyone talks about, it is non-stop depravity from there on in. You rarely get a breath before another nightmare is assaulting your eyeballs. Films can become legend when they have just one unforgettably disturbing scene in them. A Serbian Film offers up half-a-dozen in its hundred-minute running time. They will stick to you, seer into your brain and make you question how anyone could’ve gotten away with filming such things. 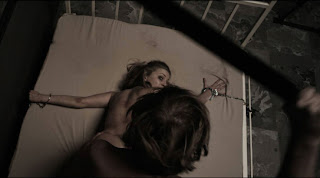 And that’s just it. A Serbian Film is the kind of work that could have only come out of the unpleasant environment from which it was birthed. You take the same story, give it to any other director in the world and I guarantee they would’ve never even approached the lines that get crossed here. They would have diluted it with humour, cut it down or sugarcoated it for fear of being persecuted or ostracized. But Spasojevic doesn’t care. He wants you to be shocked, to feel helpless and hopeless. He demands it because as far as he’s concerned, this is his reality.

I can’t recommend a film this volatile to anyone, but for those who seek out subversive cinema, rest assured, this is the one you have been looking for. The only thing more disturbing than the images within A Serbian Film is what Spasojevic could possibly be planning for his next project.

To hear the filmmakers talk about their film, check out Rob Mitchell’s video from SXSW below.

So did anyone walk out?

Yeah, there were two dudes who bolted after "that" scene, one of them was moving at a good clip, he had the arms going and everything.

The more I see other bloggers tackle this one, the more I think I should just bite the bullet and watch it. I've had a copy of it for about a month now but haven't had the balls to watch it...

The film didn't shock me that much, almost certainly because I had read so many harrowing reviews and comments about it beforehand. The mind tends to conjures up things far worse than what can be put on celluloid.

It is definitely very well made. I'd dare to say the directing, pace, look, and feel of the film would all be worthy of Oscar consideration with different material. Plus the creeping score which adds to the ambiance.


The only thing that really annoyed me about the film is the last shot. While some have said it was shocking, I thought it was absurd and all but took me out of the movie's powerful grip. The director might as well have jumped in front of the camera with a huge smile on his face while giving the thumbs up.

@Matt - Do it! Seriously, it's a tough watch, but it's a really well made film. Cam above isn't exaggerating about the quality.