I had a late night last eve, and the couch beckons. Here's some tasty bits of meat from around the 'Net.

Here below, is an amazing fan-made opening credit sequence by Daniel Kanemoto for the upcoming AMC show The Walking Dead.

If the actual credits can top that, then Frank Darabont & company truly are geniuses.

If you do not know the name Axelle Carolyn, I wager you soon will. She is a writer and actress whose credits include the shorts I lOVE YOU and Vision, as well as her recent turn as the vicious Pict warrior Aeron in Centurion. She is currently working on an intriguing passion project called The Ghost of Slaughterford. This week she dropped this concept art via her Twitter feed. 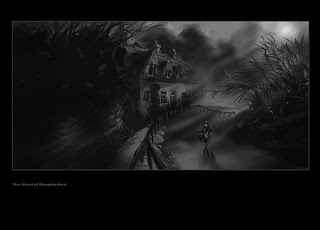 Some pretty creepy stuff to be sure. She has cited The Devil's Backbone and The Others as influences, so I'm expecting good things.

I was emailed a cool little interview with director Guillermo del Toro this week. In it, he talks about his favourite books on vampire lore, which were indespensible while creating The Strain Trilogy, a series of novels he is co-writing with Chuck Hogan.

It's good to know there are people out there who aim to take vampires back from the 'tweens.

Here is a bizarre little invention that popped up on Boingboing a few days ago. Someone clearly took their love of David Cronenberg and channeled it into something practical.

What happens when it's done charging?

A Night On The Town.

I was out of with some friends last night, taking in the sites of Nuit Blanche around town. Most of the time was spent at the newly built Lightbox though, as Midnight Madness programmer Colin Geddes had commandeered one of the theatres to spool a two-hour reel of old vintage trailers. Here below were some of the gems that screened, but for the full list, click here.

Afterwards, we took a run around the attached gallery celebrating The Essential 100. On display inside, were some wicked items like-- 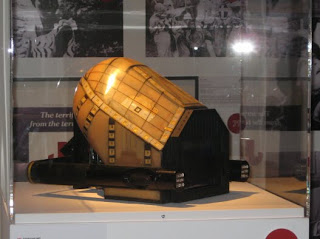 The headpiece from Videodrome. 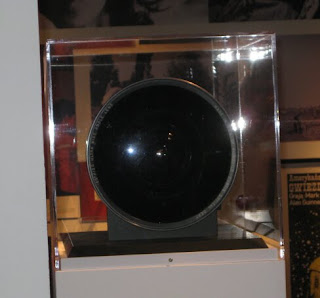 I didn't know they made fleshlights to suck off iphones these days.