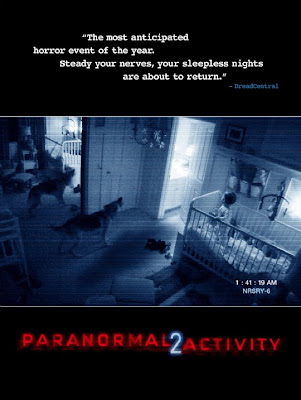 Needing some lighter fare to cleanse the palette after A Serbian Film, I took in Paranormal Activity 2 on Friday night.

Shortly after the Rey family bring home their newborn child, strange occurences start happening around the house. When they install security cameras to keep an eye on things, it starts to become apparent their problems may be of a paranormal nature.

I liked this movie quite a bit. Being a fan of the first one, I didn't really know what they were going to do to up the ante, but I think they succeeded in doing just that. There are a few reasons for this, the first of which being a much better flow to the piece. While it is true there is still a very slow progression that involves a lot of static camera footage that has you waiting for something – anything – to happen, there are more characters involved, so there is more going on in the daytime scenes. The acting is again pretty natural, at least as good as to never pull me out of the illusion that this was a real, functioning family. I'd say the escalation of things is also done a lot better here as well, cresting with an impressive “action” sequence involving Kristi (Sprague Graydon). The crowd seemed to be pretty into it, with a lot of “Ohhh shit” being uttered throughout. Yet even though I'd say Paranormal Activity 2 is technically superior to its predecessor, I don't if I would say it is scarier. After all, the filmmakers are essentially treading the same ground here. 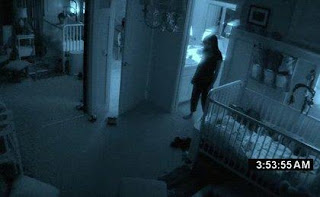 Going in, I was expecting this to be a completely different story, but it is connected to the first movie. I thought it was quite clever how they wrapped things together, especially considering it was likely conceived after the fact. Curiously, the issues that come into play with these types of films, including the first Paranormal Activity, didn't bother me at all. The reason the characters don't pack up & leave is addressed with one throwaway line and why the camera would be filming at some points didn't enter into my head much for some reason.

If you didn't get anything out of the first Paranormal Activity, then this isn't going to convert you. However, if you dug it, there is absolutely no reason why you shouldn't check it out.
Posted by Jay Clarke at 10:01 AM

I really had a great time with PA1 and was wondering if they 2nd would deliver.
Good to know! Let's see if I can get out to see it now...