I only had time to catch one genre film this weekend, so I decided on Rodrigo Cortés’ Sundance sensation Buried. It sounds like I made the right choice. 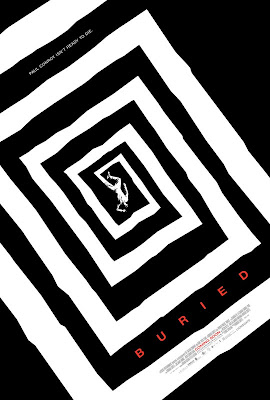 When Paul Conroy (Ryan Reynolds) a contractor working in Iraq, is buried alive in a coffin, he desperately tries to contact help via his cell phone.

Buried is a great exercise in minimalist filmmaking and kudos to Lionsgate for supporting it all the way, especially since it really is as advertised. It is Ryan Reynolds trapped in a coffin for a hundred minutes. There are no cutaways to his wife frantically calling the embassy, no hostage negotiators spouting clichés like “we’re running out of time!” and not even any shots of his captors sneering maniacally from a secret location. This movie was all Reynolds, which gave him the excellent opportunity to show us how much he is growing as an actor. There are several well-liked A-listers out there that make a living doing the same thing – you could probably name two or three right now without thinking even about it – and even though they are great at doing that one thing, you wonder if that’s it. This is clearly not the case here. Despite having to be at a heightened level of emotion throughout the piece, I found Reynolds’ performance had considerable range. I am so glad he was able to do this intimate little movie before becoming The Green Lantern for x amount of years. 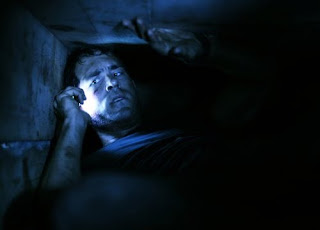 Probably the most impressive thing about Buried is that even though the whole movie takes place in a coffin, Cortés still shoots the shit out of it. He plays with perspective and lights it several different ways, be it organic or artificial. The script, penned by Chris Sparling, was also very tight, flowing from conversation to conversation with ease.

I was there; I believed it and was never, ever bored.

Buried is a solid thriller that gives you all you need; taut storytelling aided by an honest performance. It doesn’t have much rewatchability, but it still stacks up admirably against many of the bloated blockbusters out there and is something both Cortés and Reynolds should be very proud of.
Posted by Jay Clarke at 12:45 PM