Considering it's Devil’s Night this eve, it seems the perfect time to tell you about my recent trip to the Toronto Underground Cinema.

Once a month, a Toronto-based cinephile named Dion Conflict runs an event called Bargain Basement VHS Theatre, where he screens a title from his collection. Seeing crusty hard-to-find VHS titles on the big screen is something you can imagine doesn't happen every day, so I make it a point to go as frequently as I can. Seeing Continental's Terror On Tape at the inaugural show was a delightful blast from the past and more than enough to tell me these little screenings were worth my while. Oh, I forgot to mention that he doesn't tell you what you're going to be watching until you are sitting in your seat. This time around it was the 1984 slasher Satan’s Blade, for which my only knowledge was the colourful coverbox below. That, of course, made me more than willing to dig in. 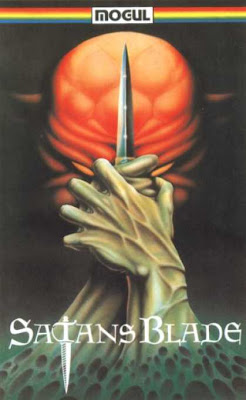 Vacationers at a ski resort are terrorized by a knife-wielding maniac.

Yeah, so Satan's Blade is pretty terrible. First off, the title is kind of misleading. It should really be Disgruntled Mountain Man Ghost's Blade, but I guess that probably wouldn't have fit on the box. As a movie, it is rife with long drawn out scenes of 'actors' stiffly delivering even stiffer dialogue. This obviously lends itself to unintentional humour, but alas, I was alone. Snickering to yourself is not nearly as fun as having friends there to share the experience. Satan's Blade is far from technically sound either. There are some nice shots here and there, so whoever was working the camera must have had some talent, but everything else is a mess. You can't even blame it on the low budget, as apparently the film cost somewhere approaching a cool million. I can tell you that it looks like very little of that ended up onscreen.

This movie is bad. I can accept that, but my only real complaint is the laughable gore. I mean, this is supposed to be a slasher movie and it looks like their total effects budget was a dollar-fifty. And they don't even try to hide it! There were countless scenes of ladies in various states of undress writhing in pain and it looked like they'd been doused with ketchup packets leftover from craft services. Take some pride in your work, guys! 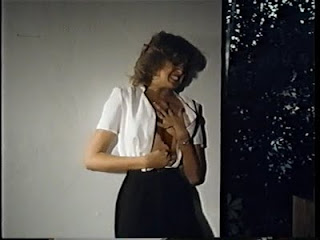 Not to worry, a little club soda'll get that out.

The weirdest thing about all this is that Dion told me that Satan's Blade has a fairly sizable following online, with copies having sold for upwards of a hundred bones. That seems odd to me. Sure, there's a modicum of good-bad appeal here, but come on, there's far better eighties fare out there you could be spending your duckets on. It's a shame because if they hadn't skimped on the effects, this movie could of at least attained a level of infamy similar to that of second-tier slashers like The Prowler or Juan Piquer Simón's Pieces.

Perhaps weirder still, is that even after all the negative comments I made above, I would still considering watching Satan's Blade a positive experience. Could there be some intangible power to it that borders on the supernatural? It would explain the Internet following. Nah, it's more likely that I just like watching shitty horror flicks.
Posted by Jay Clarke at 12:01 PM

Not to worry, Saw 7 is coming out and that'll really cleanse your palate.