It Came From The Archives 6!

For this trip into the archives, since we’re on the subject of music, I’m going to (probably against my better judgment) tell you about Otto Erotik.

Back in the mid-nineties, my crew & I were heavily into industrial music. It seemed like every night of the week we were hanging out in some dark and smoky dungeon somewhere. We also spent a lot of time screwing around with our cassette decks, inserting movie samples into our favourite songs and then playing them for each other on our way to the clubs. 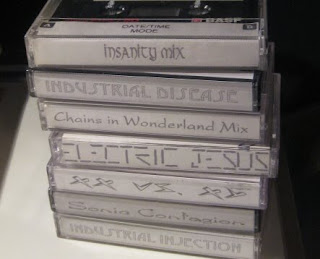 Then, a funny thing happened. A friend of mine, spurred on by an encounter with a ‘mentally-challenged’ person during a snowstorm, decided to record a song. He adlibbed some lyrics over an old KLF instrumental track and “Stab You In The Face” was born. A classic to be sure that has unfortunately since been lost for all time, but still lives on in memory.

Not long after that, using some of my brother’s old equipment, left over from his days playing in a band, I went about composing some stuff of my own. At my disposal was a Roland Juno-106 synthesizer, a Dr. Rhythm drum machine and a BOSS Digital Delay pedal. Also using an Emerson VCR for inputting samples, I then edited everything together on an IBM 486 with Windows Sound Recorder. Being that I was WAY into bands like Skinny Puppy, Front Line Assembly and The Severed Heads, that was the kind of stuff I tried to emulate. Under the name Otto Erotik, I recorded about fifteen tracks over the next two years and the some of the least embarrassing are below. I do not profess there to be any level of quality or merit in these recordings, but I do know that it was a hell of a lot of fun making them.

The first single was a track called Seklut Poison, but here below is the B-side, which was a little ode to the cult TV show The Prisoner called The Village.

The first ‘album’, as it were, was entitled Camino Complex – so named after a go-go dancer that used to go to all the same clubs we frequented – and featured the two tracks below. Without Emotion was based around samples taken from Dawn of the Dead and Sea of Midnight was inspired by the work of composer Jean Michel Jarre.

Camino Complex was followed by another single called Sects & Violets and then shortly after came The Strange Case of Phineas Gage, which included this track.

So, there you have it, the ‘musical stylings’ of Otto Erotik. There were some tracks where I actually picked up a microphone, but I’d prefer those not be floating around the Web. The last thing I need is to become the next Star Wars Kid or Grape Lady.
Posted by Jay Clarke at 10:02 AM