Man, it's a shame what happened to this movie. Barker had to deal with so much push-back from the studios that the finished film ended up being far from his original vision. You can see from the trailer that the bean counters wanted some sort of action movie with monsters. I find it funny that the trailer states “and the monsters are the good guys” when clearly 20th Century Fox had a rough time wrapping their heads around that concept.

I think the main folly is that Barker, with the talented hands at Image Entertainment at his disposal, served up over thirty unique creatures and barely half of them got any real screen time. That's why this book below is one of my more prized horror possessions. 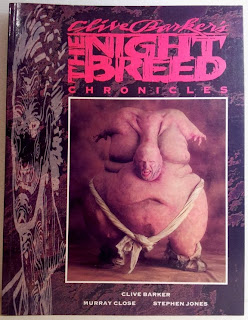 While it is fortunate that we now have the Cabal/Director's Cut of the film, I can't help but still lament the struggle that Barker had on this picture.