The Summer Of Blood

I have now had a full two weeks with the new Friday the 13th game, so I think it's finally time to weigh in on it.

Despite some stumbles out of the gate, this game is a success. I knew that I'd enjoy it as I'm pretty much exactly who this game was made for, but I'm shocked by how much fun this is for something so fundamentally simple. Up to seven counsellors try to escape from Jason on one of three maps. As counsellors, you search the map looking for parts to repair vehicles or fix the phone to call the cops. As Jason, you stalk and kill everyone in your path.

Both scenarios are fun, and they each have there own rewards. Narrowly escaping the map with Jason right on your tail is exhilarating and once you get the hang of Jason's abilities (each movie's is represented and each has their strengths and weaknesses) he can be liquid death. I am also impressed with the number of unlockable kills Jason has, some of which are location specific. I once killed someone like this!


Friday the 13th has improved dramatically over the second week of its release for two reasons. First, I believe the developers may have underestimated how popular this game would be and thus their servers were crushed at launch. It took up to twenty minutes to find a game sometimes and even when you did, glitches were common and the crash rate was about twenty-five per cent. However, the latest update this week has alleviated most of those issues.


Secondly, a week or two gave my friends enough time to pick it up, so we can now all play together instead of with random schmoes online. It makes all the difference. Just yesterday, I had this great game where I came upon the car which my friend had somehow parallel crashed in between two trees before she had to bail. While Jason was chasing her, I tried to pull of a nineteen-point turn to get back on the road. Soon I could see Jason coming in my rear view mirror, just like what happens to Chris and the van in Part 3. So great! Then there was that time I smoked my entire party as Part 7 Jason. Man, them trying to escape in the boat was a baaaaad idea. 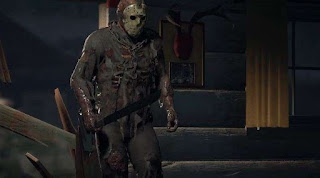 I know fourty dollars is a good chunk of change for a game that doesn't have a mass amount of content, but I do know that I've already racked up more face-time with this than I did Resident Evil 7. And that cost twice as much. I'm not saying Friday the 13th is a better game, but there is endless replay value here. If you can get six-to-eight gamer friends together, there are some priceless experiences to be had here. Especially if you all share an unbridled love for this series like I do. It may not be the slickest game, or the prettiest, but damn this game is a win.
Posted by Jay Clarke at 10:00 AM