I checked out Trey Edward Shults' thriller It Comes At Night earlier this week. 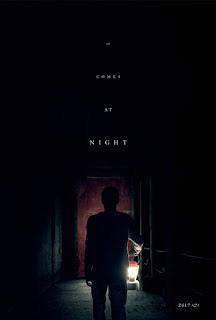 A family living in the woods after the end of the world are faced with a decision when a stranger arrives one night.


It Comes At Night is a little tricky for me to write about, as it was extremely well made and acted, but I never truly felt like it got out of second gear. I'm glad I knew nothing about this movie going in, as a look at the trailer infers a payoff that never really transpires. This movie was barely a horror film, leaning more into straight-up drama territory with some genre elements thrown in. I have no problem with that, but some critics have been holding this up to recent horror darlings Get Out, Under The Shadow and The Witch and I don't feel It Comes At Night is anywhere near as resonant as those titles.


I do think It Comes At Night has a lot in common with the latter title though, as it shares a similar forested colour pallete, pace and construct as The Witch. It just didn't payoff as well for me. I am interested to see if the same disconnect between critics and general audiences happens again.

Even though this movie was fairly straightforward, Shults did some interesting things with the material. I appreciated that very little time was spent on exposition and why the world was in its current state. All the character interactions were spot on, as well. This truly is a tight ensemble piece. I also thought that Shutls' decision to change the aspect ratio in the film's final moments legitimately enhanced his intended feeling of claustrophobia.


I do have to admit it took me a while to get into the movie. It Comes At Night is a very quiet film and it sucks when the asshat behind you not only has the loudest fucking popcorn bag in the world, he also feels the need to crack a beer every thirty minutes. Man, the world is full of shitty people and I hope that when it finally goes tits up, people like him are the first to go. 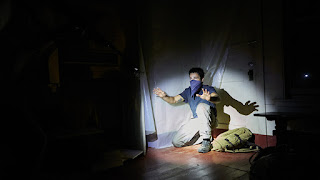 Anyway, It Comes At Night is a solid movie, but I don't see myself ever revisiting it. Shults definitely has directing chops though, so (like The Witch's Robert Eggers) I'm keen to see where he goes from here.
Posted by Jay Clarke at 10:00 AM