Something Rotten In Denmark.

When Todd from Twitch informed me that Ole Bornedal's Deliver Us From Evil was one of his favourite films so far this year, I knew I had to get a seat when I found out it was screening at this year's TIFF. The Danish director has a good track record with me, having done both versions of the nineties thriller Nightwatch and the quirky children's movie The Substitute in 2007. He was in attendance at the screening. 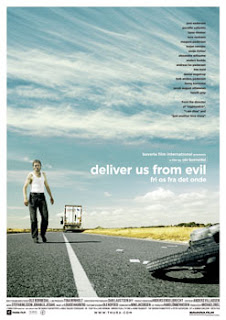 When drunkard Lars (Jens Andersen) runs over an old woman with his truck, he goes about framing the town outcast, Alain (Bojan Navojec). When the townsfolk come to Lars' brother's Johannes' (Lasse Rimmer) house – whom Alain has been doing odd jobs for – with the intention of lynching him, Johannes holes him away inside. Armed only with a nail gun, Johannes must keep the angry mob at bay until help arrives.

Deliver Us From Evil is pretty exceptional. The suspense is built to a fever pitch, as you see events being set in motion that are clearly not going to end well. It most notably recalls Sam Peckinpah's Straw Dogs, but Bornedal said he drew on the American home invasion subgenre as a whole. He was quick to point out that xenophobia is rampant in Europe nowadays and this film was made out of necessity to comment on that. 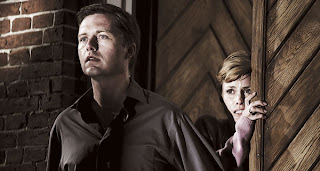 Deliver Us From Evil has a structure almost like a play, where a bard-like character comes onscreen and introduces the story, sets it in motion, and then comes back to conclude the tale. As you would expect in any small town, it is full of colourful characters that we see at their best and their worst. Ingvar (Mogens Pedersen) is the grisled town patriarch and the only thing keeping his war-torn soul from the darkness is the very woman who Lars has run down. Lars and his girlfriend Scarlett (Pernille Vallentin) have one of the most unhealthy relationships that I've ever seen onscreen, yet with one speech to his brother's wife Pernille (Lene Nystrøm), Lars manages to almost come off as sympathetic. What you take away from Deliver Us From Evil is everyone has good and evil in them and it is up to each one of us to decide which path we want to take.

Bornedal ended the Q&A with the news that a future project he is working on is a cross between Lost In Translation and The Silence Of The Lambs. I want to see that movie!
Posted by Jay Clarke at 11:34 AM