Waking To A Nightmare.

Earlier this year the movie Pandorum popped up on my radar. Even though director Paul W.S. Anderson (who acted as producer on this film) may not have the best track record with genre fans – even though I personally find the Resident Evil films to quite entertaining – the ambiguous trailer for the film definitely piqued my interest. After a fairly sizable ad campaign (for a genre film that isn’t Saw anyway), Pandorum has made its way into theatres. 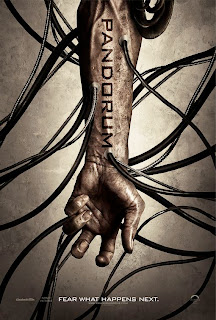 When Cpl. Bower (Ben Foster) and Lt. Payton (Dennis Quaid) suddenly awake from their cryo-sleep on the spaceship Elysium, they go about trying to recover their lost memories and find out why they seem to be the only people left on the ship.

I don’t know if it’s that we’ve been spoiled this year with some really awesome science fiction like District 9 and Moon, but I thought Pandorum was a bit of a misfire. Although its ideas were lofty, it gets bogged down in a mess of science-fiction conventions. Much of the film is as clunky as the dying ship and almost every scene introduces a new character whose quick to clumsily spout exposition. Although, to be fair I did become more interested once Nadia (played by German actress Antje Traue) came into the picture. 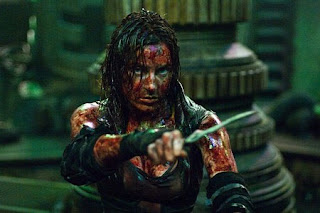 Nadia getting her Descent on.

On the plus side, the look of the film IS impressive. The ship’s interior, while not entirely original, feels like a hulking, breathing beast and the creature designs are pretty cool, especially the little guy we glimpse in the trailer. There is also some neat futuristic gear on display, as well. I would love to get my hands on one of those laser shavers! After all is said and done though, there are just some things that didn’t add up for me. Normally I’d let a lot of that shit slide, but considering how high concept Pandorum tries to be, I have to scrutinize. I don’t want to blame the director Christian Alvart, as I suspect – and I could very well be wrong on this – maybe there were too many cooks in the kitchen here. The performances are okay, but poor Foster has to carry most of the movie on his back. 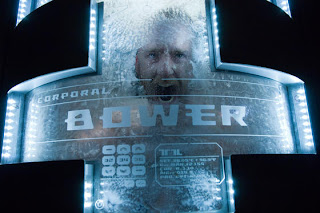 I don’t mean to be as harsh as I sound. Pandorum is definitely watchable fare, but I don’t think it lived up to the promise of its trailer. Maybe I was expecting too much. It made me hope for something like Anderson’s 1997 film Event Horizon, but what I got was a far cry from that. Starting with the 2007 underrated gem Sunshine, the current state of straight-up science fiction has a very high standard, so you have to bring your A-game if you want to impress me nowadays.
Posted by Jay Clarke at 3:10 PM

Thanks for the review Jay! Especially after seeing a few mainstream movie sites already condemning the film without even seeing it. It's a shame by your thoughts, space horror has such powerful potential and so few have really nailed it with most being pretty wishy-washy.

I was interested in seeing this too. Sounds like it's not as good as it looks though. I agree that the bar has been set high. I'll probably still check it out.

Oh, by all means see it, you may very well get more out of it than I did.

I think it's awesome we are getting spoiled with great SciFi! The more then better, but this one not so much the better.

Clunky is a great way to describe the film - it totally feels clunky. Nadja was great addition to the film, I had no idea of that character before seeing it so that was a treat.