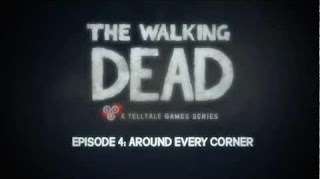 Well, Around Every Corner, the fourth installment of The Walking Dead game, wasn't any easier in terms of the moral dilemmas it threw up for me. This time around, I made a decision that I immediately regretted. Even though I had been waiting for an opportunity to make said choice, there was no joy in it. Things are never black and white in this game. It was something that needed to be done for the safety of the group, but has increasingly been the case, explaining my actions to Clementine was... problematic.

I'm sad to say the rift between my character (Lee) and Clementine is getting bigger, as I feel ill-equipped to justify some of the shit I had to do in this episode. It doesn't help that it seems like every five minutes someone in my group is saying “make sure you take care of that kid” or “are you sure you can handle this?”

I should point out that the irony is not lost on me. I am stressing over not only the safety of a virtual child that is not even mine, but also how she perceives me. How the fuck did Telltale manage to do this to me?

As far as the story goes, I thought the Crawford arc was very well laid out. Around Every Corner also introduced a new character named Molly, a spirited lone wolf, much like Michonne. After dealing with my ragtag group of survivors for four episodes now, I almost envy Molly. She just has herself to think about, and has gotten really good at it.

Lastly, something happened toward the end of this episode that I can honestly say I didn't see coming. Now, I am almost dreading the last installment, No Time Left. I have an idea now of how it is going to play out, and it's going to be gutting. And that's the best case scenario. I have to do it, though.

Clementine is counting on me.
Posted by Jay Clarke at 10:00 AM