In a stroke of good fortune, I was able to strike off another one of the Time Out Best 100 List titles during a recent Laser Blast meet-up. 1945’s Ealing Studios anthology Dead of Night. 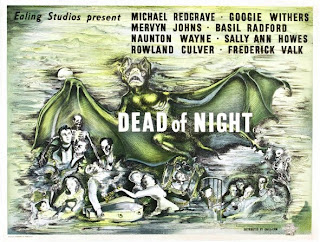 I have some issues with Dead of Night’s placement on the list, but let’s first focus on the positives. The wraparound story of Mr. Craig (Mervyn Johns) feeling some serious déjà vu while attending a party at a country house is pretty entertaining. Dead of Night is from the fourties, so it has that classic vibe with the fast, overlapping dialogue that Howard Hawks pioneered. I enjoy that stuff. People seemed so jolly in films back then.

The first few stories of the piece are somewhat glorified anecdotes and I’d say that “Golfing Story” – based on a story by H.G. Wells – feels like the most dated, as it features two men courting a woman who seems completely content (overjoyed in fact) that she has no say in her future. It is no doubt a sign of the times, but it also has a comedic bent that seems out of place among the rest. Once Dead of Night gets into the meat of the picture though, there is some really good stuff to be had.

The film’s strength lies with the pair of stories, “The Haunted Mirror” and “The Ventriloquist’s Dummy”. The former has a storyline that surely would have inspired some future genre scribes like Rod Serling and Richard Matheson and also features a visual flair quite striking for the time. The latter is what I imagine most of the filmmakers’ who vaulted Dead of Night onto the lists’ upper echelon remember, and I have to admit that even some sixty-some years on, it is still pretty creepy. It is the last story in the anthology and ends on a strong note, even if the conclusion of the wraparound is something we have seen countless times since.

After many months of knocking movies off this list, I don’t think I’ve come up across one that I’m in disagreement with… until now. Don’t get me wrong, Dead of Night is a solid film, but number thirty-five? No way! And considering this is only one of two horror anthologies on the list – the other being Mario Bava’s Black Sabbath, which easily earns its spot on artistic merit alone – I can’t justify its place here. In my opinion, it is not even the best British anthology, as I feel Amicus’ 1972 Tales From The Crypt offers more bang for your buck.

There is no question that Dead of Night is influential. It was one of the first films to employ the anthology format (behind 1943's Dr. Terror's House of Horrors and a few earlier German productions) and it gets points for trailblazing, but overall its lofty position on the Time Out List seems inflated to me.
Posted by Jay Clarke at 10:00 AM