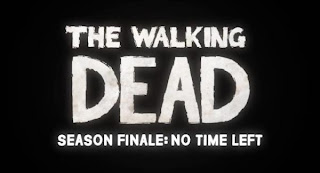 I finished The Walking Dead game a few days ago, and it is still with me, lingering in my psyche. The last chapter, No Time Left, was a tad shorter than the other four installments, but it was no less impactful. I don't think this episode could've been more aptly titled, as the sense of urgency was always hanging over my character's (Lee) head.

The final two set pieces were superbly executed, the first being a verbal chess match with Clementine's captor and the latter the inevitable conclusion to a long journey that started when I pressed Start way back in the spring. For the sake of my masculinity, I'll refrain from commenting on my reaction to No Time Left's final moments. The ending (or at least my ending) left a few questions unanswered, but at least the post-credits epilogue shed some light on the most important one.

I find my large emotional investment in this game hard to explain, but hopefully sometime soon you will experience it for yourself and know of what I speak.

My hat goes off to Telltale Games for not only creating a twenty-dollar title more valuable than most that are three-times as expensive, but also providing a Walking Dead experience that was more affecting than the comic and show combined.
Posted by Jay Clarke at 10:00 AM

Yes, I'm a big fan of the art style of this game.

Having only gone through the game once, I don't know how many different endings there are. I imagine the framework of the game remains the same regardless, but there are a lot of variations at several points depending on your actions.