I'm still sussing out my best of 2012 list, but in the meantime I thought I'd throw this up here. With Quentin Tarantino's newest film Django Unchained recently riding into the theatres, I'd like to bring up a little book I got in the mail a few weeks back. If You Like Quentin Tarantino by Katharine Rife digs deep into his filmography and pulls out countless influences and homages. The reason I am mentioning it here on the pages of The Horror Section is due to its inclusion of several horror flicks. Classic genre staples, such as The Texas Chainsaw Massacre, My Bloody Valentine, Slumber Party Massacre, and Pieces are all discussed.


As a holiday bonus, and its Canadian connection, I have included the section that covers My Bloody Valentine. Tarantino has, on a few occasions, cited it as his favourite slasher flick and you know how I feel about it, so I was glad to see it appear in the book. See you in a few days.


My Bloody Valentine combines a popular cinematic trend (holiday-themed slasher movies) with a striking image (a miner in full uniform and gas mask) and some familiar genre tropes (horny young kids getting naked) to create a hybrid that for all of its sex and violence still seems rather quaint. This isn’t really the movie’s fault though: My Bloody Valentine was famously, extensively cut to avoid an X rating. Censors demanded cuts to every single kill scene in the movie, and the studios complied, spooked by the murder of John Lennon and the immense backlash that had accompanied Friday the 13th the year before.

Most of the time, these kinds of cuts are no big deal—a few frames that are barely perceptible when they do get restored. But with My Bloody Valentine, they really are two different movies; the cut version is practically bloodless, making all of the murder scenes short, vague, and confusing. It’s a shame, too, because when you do see the deleted scenes, the deaths are creative (one victim is impaled on a shower head so the water sprays out of her open mouth) and the gore SFX are really quite well done. The uncut My Bloody Valentine remained unseen until 2009, when a re-release hit theaters in advance of a 3D remake. The restored version is still unavailable on Blu-ray; somewhat inexplicably, the distributor decided to include the extended gore sequences as special features rather than putting them back in the movie itself. 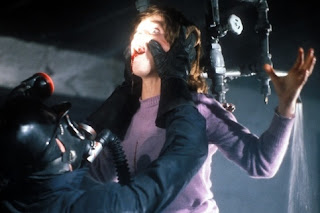 My Bloody Valentine is obviously not a Hollywood production (all the actors’ Canadian accents are intact, director George Mihalka notes proudly). It was shot on location in the small mining town of Sydney Mines, Nova Scotia; the mine scenes were shot in a real coal mine that had been shut down only a few years before, and some rather drastic safety risks were taken by cast and crew alike. As Mihalka explains in a 2005 interview with the webzine The Terror Trap: “The only lighting equipment we were allowed to use was safety lighting equipment because there were no sparks. It was quite scary working like that because at a certain point, it becomes extremely dangerous. I mean, you can die. That’s why they used to have canaries in coal mines.”

The story is pretty straightforward, if a little silly: it’s 1980, and the small town of Valentine Bluffs hasn’t held a Valentine’s Day dance in twenty years. You’d think they would, being the small town of Valentine’s Bluffs and all, but this sleepy mining hamlet is afflicted with a curse. See, back in 1960, some mine foremen left their posts early to attend the Valentine’s Day dance, resulting in a methane gas explosion that left a group of miners trapped underground for six weeks. The only survivor, Harry Warden, was driven insane by the ordeal and sent to a mental institution. He escaped exactly one year later to cut out the hearts of the guilty foremen, vowing that the same would happen to any unwary schmuck who ever celebrated Valentine’s Day in Valentine’s Bluffs again. But that was twenty years ago, and to a group of young miners, Harry Warden is nothing but a fairy tale. So the teens decide to defy the town sheriff and have a Valentine’s Day party down at the mine. And as the audience already knows, this is one urban legend that’s true . . . 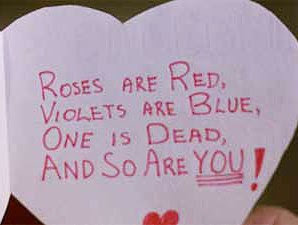 My Bloody Valentine is a giddy, somewhat guilty pleasure, but to its credit, unlike most slasher movies, it’s carefully paced and structured well enough that you won’t forget it right away. Tarantino hasn’t, as he told Entertainment Weekly in 2006: “As far as slasher films go, of course, I love Halloween and all those. But as time’s gone on, I think My Bloody Valentine may be my favorite.”

Excerpt posted by permission from Hal Leonard Books.
Posted by Jay Clarke at 10:00 AM